Auto makers led a 7.3% surge in durable goods orders in June. The gain in manufacturing followed a 15.1% increase in orders in May and an 18.3% decline in April. Aircraft —both commercial and military—held back overall gains in June. Excluding transportation, orders rose 3.3%. Compared to June 2019, total orders were down 13.3%; they were 3.8% lower excluding transportation.

Housing costs continued to outpace overall inflation in May as the S&P CoreLogic Case-Shiller home price index posted a 3.7% increase from May 2019. The gain was down from a 3.9% increase in April, the first deceleration since August. With data from Detroit delayed, prices from each of the other places in the 20-city composite index increased from the year before, led by a 9% rise in Phoenix.

The Conference Board said its consumer confidence index slipped in July on lower optimism for future prospects, especially in Michigan, Florida, Texas and California—all areas experiencing resurgence in the COVID-19 coronavirus. The business research group said uncertainty over the pandemic doesn’t bode well for economic recovery or the consumer spending that drives about 70% of U.S. gross domestic product.

The National Association of Realtors said its index of pending home sales jumped 16.6% in June as the pandemic-delayed real estate season took off amid low mortgage rates. Contract signings were 6.3% ahead of year-earlier pending sales, prompting the trade association to raise its 2020 forecast to 5.6 million homes. The group expects a 3% decline in existing home sales this year and a 3% rise in new homes. Its projections include 4% price appreciation for homes this year and mortgage rates around 3% for the next year and a half.

The U.S. economy sank at an annual pace of 32.9% in the second quarter, more than triple the rate of the previous worst three months in data going back to 1947. Shutdowns and job losses resulting from the pandemic were on top of a 5.1% contraction in gross domestic product in the first quarter, according to preliminary estimates from the Bureau of Economic Analysis. Consumer spending, which accounts for about 70% of U.S. economic activity, fell at an annual rate of 34.6% in April, May and June, following a 6.9% drop in the first quarter. About the only part of the economy expanding in the second quarter was federal spending, which economists believe will help save the economy from more dire consequences. 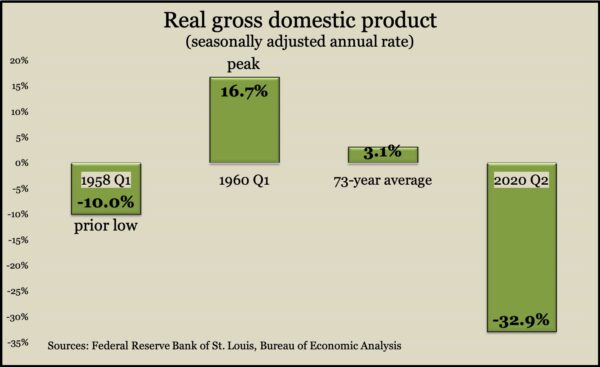 The four-week moving average for initial unemployment claims rose for the first time in 14 weeks as a resurgence in COVID-19 cases has prompted more layoffs. The Labor Department said weekly claims rose for the second week in a row, eclipsing 1.4 million applications after trailing off from a record 6.9 million at the end of March. More than 30 million Americans were receiving unemployment benefits, up from 1.7 million at the same time last year. The latest numbers include 13 million receiving pandemic relief.

The Bureau of Economic Analysis said consumer spending—which drives more than two-thirds of economic activity—rose 5.6% in June following an 8.5% increase in May. However, the pace of spending remained more than $1 trillion or 6.9% behind the pace in February, before widespread closings from the pandemic. Continued drop-offs in government subsidies accounted for the bulk of the 1.1% decline in personal income in June, which followed a 4.4% decrease in May. The personal saving rate fell to 19% of disposable income in June after reaching as high as 33.5% in April but remained far ahead of the 7.6% rate in January. The Federal Reserve’s favorite measure of inflation reached an annual rate of 0.9% in June, less than half the Fed’s long-term target.

Consumer expectations fell in July to tie with May for six-year lows, according to the University of Michigan consumer sentiment index. An economist with the longstanding survey blamed consumers’ diminished outlook for the economy and their own personal finances on setbacks in controlling the spread of the coronavirus. He said lower expectations suggest Americans aren’t counting on the recession ending anytime soon.