Contending that housing demand is as strong as before the recession but that lack of inventory is holding back transactions, the National Association of Realtors said the pace of existing home sales declined 1.8% in June. The trade group said the number of houses on the market fell from June 2016 for the 25th month in a row. Steady demand and low inventory have challenged the budgets of potential home buyers by escalating prices. The median sales price rose 6.5% from June 2016, the 64th consecutive gain.

Housing prices continued to far outpace overall inflation and average wages in May, according to data from the S&P CoreLogic Case-Shiller index. The year-to-year 5.7% increase in the 20-city composite index decelerated from 5.8% in April. Nine of the 20 cities had higher year-to-year price gains. A housing economist with S&P cited low inventory for keeping prices up and said the pace of new construction isn’t helping enough.

A leading indicator of consumer spending, consumer confidence rose in July. The Conference Board said its index reached a reading of 121.1, up from 117.3 in June and above 110 for the eighth month in a row, which hasn’t happened in almost 20 years. Consumers’ assessment of current conditions was the highest since July 2001. The business research group said its index suggests continued economic expansion well into the second half of the year.

The Commerce Department reported slightly lower-than-expected new home sales in June. The annual rate of 610,000 houses sold rose less than 1% from the May rate and increased 9% from the year-ago pace. June sales remained near the high end of post-recession data although still below the level entering into the recession as well as the 54-year average. 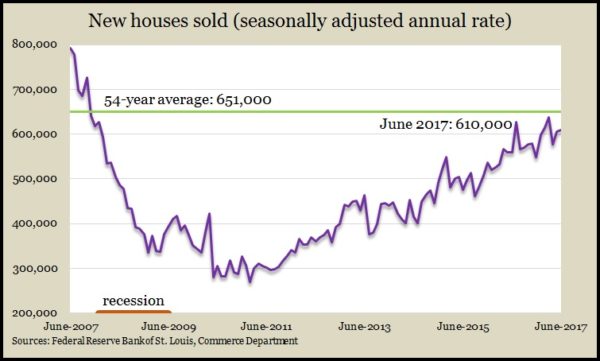 The Commerce Department reported that durable goods orders rose 6.5% in June, mostly because of a takeoff in commercial airline orders. Excluding volatile demand for transportation equipment, orders increased 0.2%, the second gain in a row. Year-to-date, core orders were 4.9% ahead of the same time last year. Non-defense capital goods orders excluding aircraft – a proxy for business investment – remained at about the same level as midway through the recession.

The moving four-week average for initial unemployment claims was unchanged after declining for the first time in three weeks. The indicator stayed 32% below the 50-year average, according to data from the Labor Department. Jobless applications have been lower than the long-term level every week since early 2013, a sign that employers remain reluctant to let workers go, which eventually should boost wages and encourage consumer spending.

The U.S. economy grew at a 2.6% annual rate in the second quarter, more than doubling the first-quarter pace, the Bureau of Economic Analysis said. Gross Domestic Product picked up with a strengthening in consumer spending, which rose at a 2.8% pace vs. 1.9% in the first quarter. Other contributors included increased business spending, net exports, federal government spending and slower depletion of inventories. The preliminary data also showed the Federal Reserve’s favorite inflation gauge falling to 0.9% – less than half of the Fed’s 2% target.

Considered a leading indicator of consumer spending, The University Michigan consumer sentiment index rose slightly from its mid-July reading. The index was down from June and has been shrinking slightly since its 12-year high in January. Feelings toward current conditions reached their highest point since 2005, thanks to sentiment toward personal finances, but expectations continued to fall as consumers tempered their anticipation of progress from Washington. A university economist cited a severe divide in expectations based on political partisanship.