Existing home sales for June decreased 0.6% to an annual pace of 5.38 million, the third straight decline. Sales were 2.2% below the year-earlier pace. The National Association of Realtors blamed “ongoing supply and demand imbalance” for another record high median selling price, which was $276,900, up 5.2% from June 2017.

Total housing inventory rose 4.3% from May to 1.95 million existing homes available for sale. Although inventory had its first year-to-year increase in three years, it remained short of what housing economists consider sustainable for current demand levels.

New home sales decreased in June by 5.3% to 631,000 units, which was the slowest annual pace since October, according to the Commerce Department. New home sales are drawn from permits and tend to be volatile month-to-month. They increased 2.4% from June 2017. Also, inventory was the highest it’s been since August, though still below the six-month supply rate seen as sustainable. The median sales price of new houses sold in June was $302,100, down 4.2% year-to-year. 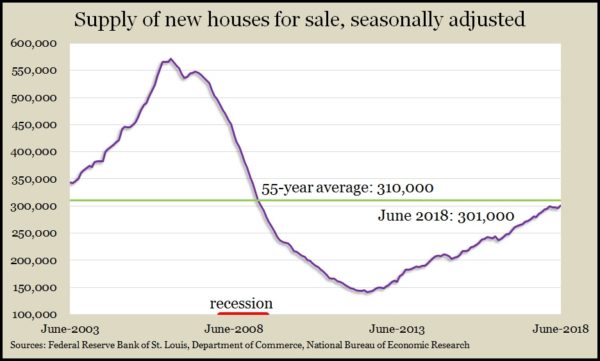 The four-week moving average for initial unemployment insurance claims was down for the third week in a row at 218,000, hovering around the lowest level since late 1969. According to data from the Labor Department, initial claims are still 39% below the 51-year average, which is a good indication of employer reluctance to let workers go and a sign of a tight labor market.

Real gross domestic product increased at an annual rate of 4.1% in the second quarter, the biggest gain since mid-2014. Contributors to the rise included personal consumption, exports, commercial investments, and federal spending, which were offset by trends in inventory buildup, housing and imports. The personal savings rate was 6.8%, down from 7.2%. The PCE price index, excluding food and energy, rose 2%, down from a 2.2% inflation rate in the first three months of the year.

The University of Michigan reported the consumer sentiment index slipped to 97.9 for July, which is near the 12-month average of 97.7. However, it’s down from June’s final reading of 98.2. Sentiment remains high because of confidence in job and income prospects, despite expectations for higher inflation. Concerns about tariffs having a negative economic impact were spontaneously mentioned by 35% of responding households, up from 21% in June and 15% in May. A survey economist said negative economic expectations could disappear if trade issues with Europe are settled and agreements are made with China, Canada, and Mexico.