As mortgage rates begin inching up from record lows, sales of existing houses slowed in June, falling below analyst expectations. Still, the annual rate of nearly 5.1 million houses sold represented a 15% increase from June 2012, according to the National Association of Realtors. The median sales price rose on a year-to-year basis for the 16th month in a row, which could encourage more homeowners to put their houses on the market.

The annual rate of new-home sales rose more than expected in June, reaching the highest point in more than five years. As with existing houses, the median price for new houses continues to increase, in part because of relatively low supplies of newly built houses for sale. The Commerce Department reported the inventory dipped to its lowest level since January. 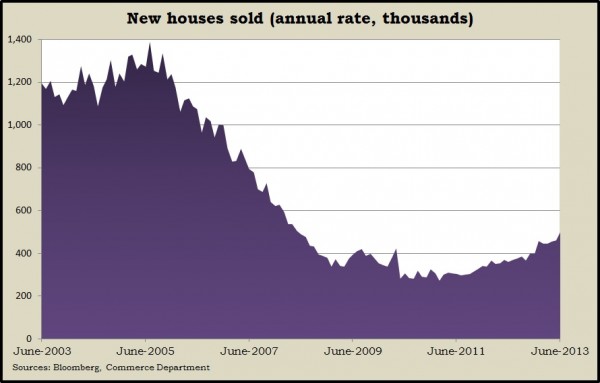 Commerce said durable goods orders for June grew by 4.2%, mostly thanks to requests for commercial aircraft and continued momentum in automotive sales. Aside from the volatile transportation segment, manufacturing orders were unchanged from May. But capital goods orders for non-defense items excluding aircraft – a proxy for business investments – rose for the fourth month in a row, which hasn’t happened in two years.

The four-week moving average of initial unemployment claims dipped for the fourth time in five weeks, nearing a recovery low set in early May. The Labor Department reported claims are about where they were before the financial collapse in 2008. Though job losses have been relatively low, employers remain reluctant to add positions.

Consumers, the driving force of U.S. economic activity, improved their sentiment in July, according to the University of Michigan and Thomson Reuters. A longstanding survey showed consumers feeling better about the economy than at any time since July 2007 – before the Great Recession. In particular, Americans are bullish on current conditions. Their outlook for the next six months declined slightly.