Consumers spent 0.5% more in June than May, according to retail sales data from the Commerce Department. Eight of 13 categories rose in monthly sales, including gas stations, car dealers, home-and-garden centers, restaurants and health-and-beauty stores. Some of the outliers were electronics, sporting goods and clothing stores. Year-to-year sales overall rose 6.6%, compared to the long-term average of 4.3%, making June’s the largest 12-month gain since February 2012.

Business inventories rose 0.4% in May, while sales increased 1.4%, according to an additional report by the Commerce Department. Inventories were up 4.4% from last May, while sales were up 8.6%, resulting in the lowest inventories-to-sales ratio in over three years. The ratio indicates that businesses are not overstocking and are trying not to get too far ahead of demand.

The Federal Reserve reported that industrial production rose 0.6% in June, following a decline of 0.5% in May. Automotive production rebounded after a fire at a parts supplier in May. Factory output rose for the third quarter in a row. The continued increase in the mining index was supported by gains in the oil and gas sector, which surpassed its previous output peak of December 2014. Utilities, on the other hand, declined for the second month in a row.

Capacity utilization for the industrial sector for June was 78%, still below its 45-year average of 79.8%, suggesting inflation remained relatively subdued. 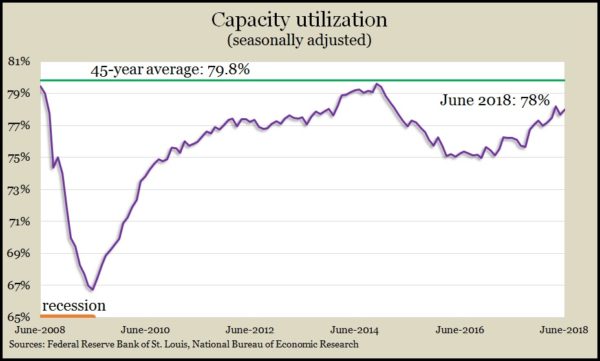 New residential construction for June 2018 was lower than expected. Housing starts were at 1.173 million, the slowest pace in nine months. Single-family starts declined from May by 9.1% and multi-family fell by 20.2%. The volatile indicator suggested a down month for housing momentum. Building permits were also lower than anticipated, down 2.2% from the May rate and down 3% from the year before. However, single-family permits gained both monthly and year-to-year, suggesting more houses may be in the pipeline amid a shortage of houses for sale.

The four-week moving average of initial unemployment insurance claims moved lower for the second week in a row to 220,500, down 9.7% from a year ago. That suggests employers’ persistent reluctance to let workers go, a sign of a strong labor market. Initial claims for state unemployment benefits dropped by 8,000 to 207,000 for the week ended July 14, the lowest reading since early December 1969, the Labor Department said.

The Conference Board’s Leading Economic Index improved 0.5% for June, due to continued “solid growth” in the U.S. economy. That increase was higher than analysts expected and followed no change in May. The only indicator that declined was housing permits but did not suggest any growth slowdown in the short-term, according to an economist for the business research group.

No significant reports or releases.