Consumer spending fell in June as retail sales dipped for the third month in a row – the first full quarter of losses since the end of 2008. The Commerce Department said lower prices for gasoline contributed to a broad decrease in sales. With consumers driving 70% of GDP growth, the trend suggested further weakness for the anemic economy.

Businesses built up more inventories in May even while sales slipped for the second month in a row, Commerce said in a separate report. When inventories grow faster than sales, companies can risk getting supplies too far ahead of demand. But the ratio between stockpiles and sales has continued to hover near record lows.

Reflecting a leveling off in inflation, the Consumer Price Index was unchanged in June. The core rate, which factors out volatile food and energy prices, rose only marginally. The Bureau of Labor Statistics reported that energy costs fell for the third month in a row while food and healthcare got more expensive. The 12-month core inflation rate was 2.2% in June, down from 2.3% in May.

Two key measures of industrial strength showed slight progress in June, according to the Federal Reserve Board. Offset somewhat by lighter use of utilities, industrial production and capacity utilization both made mild improvements in June. Industry has been driving much of the economic recovery, which officially began three years ago.

More evidence of a housing comeback emerged from a Commerce Department report showing June housing starts at the highest annual rate since October 2008. Building permits, which indicate future housing plans, fell from May, but the pace remained relatively healthy, and single-family permits rose for the third month in a row. 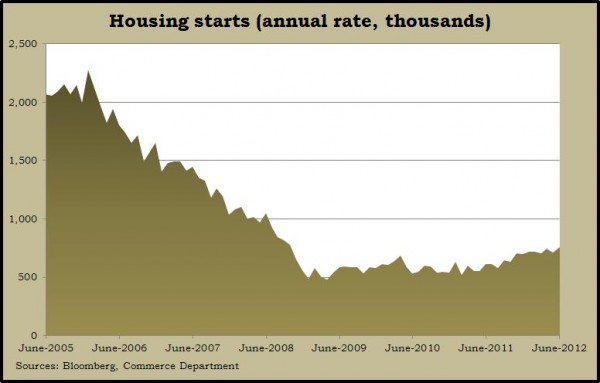 Although weekly initial unemployment claims rose much more than analysts expected, the less volatile moving four-week average dipped for the fourth week in a row. The average was at its lowest level since May, according to the Department of Labor, suggesting continued slight progress in the beleaguered labor market.

The National Association of Realtors said existing home sales fell in June to their lowest annual rate since October. But the trade group contended that more houses would have sold if more had been available for sale. A 24% drop in listings since June 2011 helped boost the median price by nearly 8% in that time. That’s the fourth consecutive month of year-to-year price gains, which hasn’t happened since 2006.

The Conference Board’s index of Leading Economic Indicators fell for the second time in three months. The business research group said drops in consumer confidence and factory orders offset gains in measures such as construction and financial conditions. The result is a portrait of a “steady but soft” economy with no pick-up in sight for the next few months.