Housing prices continued to climb faster than overall inflation in April. The S&P CoreLogic Case-Shiller home price index showed prices rising 14.6% nationwide in the year ended April 2020. That was the fastest pace in 33 years of data and compared to a 3.6% inflation rate measured by the personal consumption expenditures index (PCE) used by the Federal Reserve Board to gauge inflation overall. Historically low housing inventory and historically low mortgage rates have combined for a strong market for sellers. Also, an S&P economist said the pandemic probably hastened a migration to suburban houses from urban apartments. 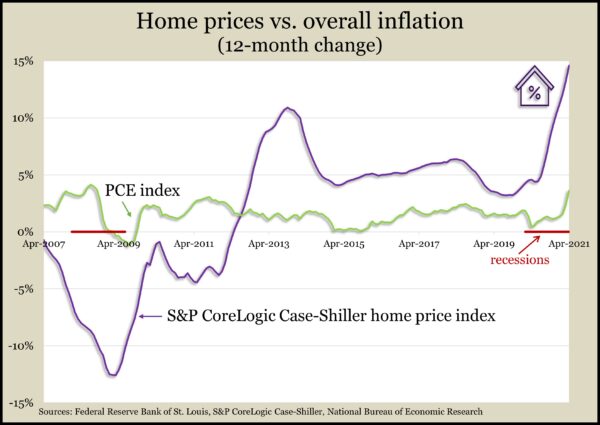 The Conference Board said its consumer confidence index rose in June to its highest point since the COVID-19 pandemic plunged the economy into recession in early 2020. The business research group said attitudes toward both current conditions and the near-term outlook suggested increased momentum toward stronger economic growth in coming months. Even though consumers said they anticipated short-term inflation increases, they said they planned to increase spending on houses, cars, appliances and vacations.

The four-week moving average for initial unemployment claims declined for the 11th time in 12 weeks as it continued to recede from record applications at the beginning of the pandemic. Average claims were just under 393,000, down from 1.5 million the year before and within 6% of the 54-year average. The Labor Department said 14.7 million Americans were claiming unemployment compensation in the latest week, about three quarters of them through special pandemic relief programs.

The U.S. housing recovery kept the pace of construction spending near an all-time high in May. The Commerce Department said construction expenditures overall declined 0.2% from April to an annual rate of more than $1.5 trillion, but residential spending rose 0.2% and was up more than 28% from the year before. Total spending on construction remained above the pre-pandemic level for the sixth month in a row.

The Institute for Supply Management reported that its manufacturing index signaled expansion in June for the 13th month in a row, although at a slightly slower pace than in May. Based on surveys of purchasing managers, the index reflected what the trade group called a continued struggle to keep up with increasing demand. Respondents cited ongoing challenges staffing their operations amid rising backlogs of orders, shrinking customer inventories and record lead times for raw materials. The price component of the index rose at the fastest pace since July 1979.

U.S. employers added a net 850,000 jobs in June, as the labor economy continued to gradually recover. The Bureau of Labor Statistics said employment remained 6.8 million jobs or 4.4% below its February 2020 level, or about where payrolls stood at the beginning of 2017. The leisure and hospitality industry accounted for 40% of the job additions in June but was still 2.2 million or 12.9% shy of its staffing level before the pandemic. The same report showed the unemployment rate steady at 5.9%, which was down from a record 14.8% in April 2020 but up from 3.5% in February 2020, a 51-year low. 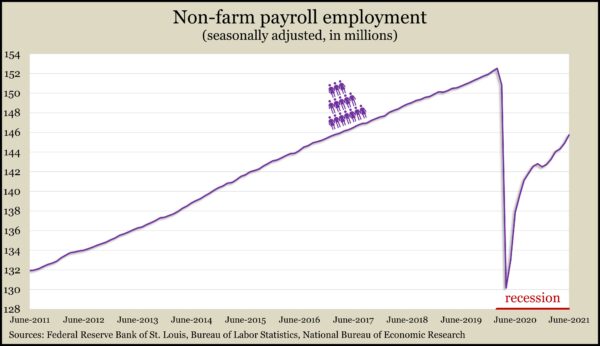 The U.S. trade deficit grew 3.1% in May. The $71.2 billion gap between exports and imports, which detracts from gross domestic product, resulted from the value of imports rising at a faster rate than exports. Imports were up 1.3% from April, while exports rose 0.6%. Year to year, the trade gap rose 29.7%.

A report from the Commerce Department showed manufacturing orders gaining in May for the 11th time in 12 months. The value of orders rose 1.7% in May after a 0.1% decline in April. Reflecting the comeback of the global economy, orders were above the pre-pandemic level for the sixth month in a row. Excluding volatile orders for transportation equipment, orders rose 0.7% for the month. A proxy for business investments reached a record high and was up 16.2% from the level before the pandemic.