Businesses barely maintained inventories in May while sales grew, Commerce said in a separate report. The resulting inventories-to-sales ratio declined, suggesting businesses might soon need to ramp up production and maybe even hire more workers to keep up with demand.

Inflation remained in check in June, according to the broadest measure of cost changes, the Consumer Price Index. Higher prices for gasoline and groceries lifted the main inflation rate more than analysts expected. But the core rate, which factors out volatile food and energy prices, rose only marginally for the month and was up 1.6% from June 2012, the Bureau of Labor Statistics reported. That’s the lowest rate in two years and supports Federal Reserve policies to keep interest rates low to stimulate the economy.

Two key measures of industrial strength showed slight progress in June, according to the Fed. Offset somewhat by lighter use of utilities, industrial production and capacity utilization both made mild improvements in June. Industry drove much of the initial economic recovery, which officially began four years ago.

Mixed data suggested shakiness in the housing recovery in June, with housing starts at the lowest annual rate in a year. A Commerce Department report showed the volatile multi-housing sector slowing much of the pace. Building permits, which indicate future housing plans, also slackened from previous months, but the pace remained relatively healthy, especially for single-family permits. 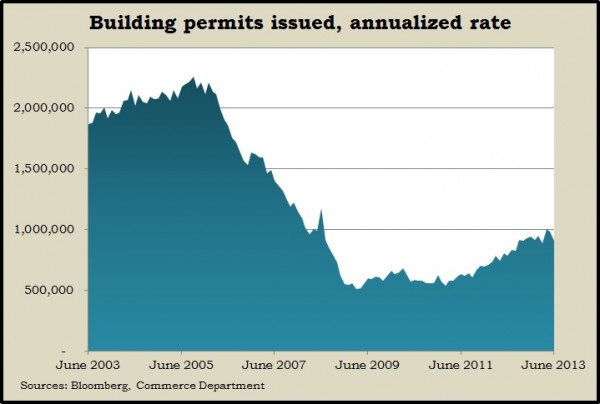 The four-week average for initial unemployment claims dropped for the third time in four weeks, continuing to suggest reluctance among employers to let go of workers. The average dropped back to its level of mid-June, according to the Department of Labor, which could presage further progress in July’s employment data.

The Conference Board’s index of Leading Economic Indicators didn’t change from May to June, although the six-month growth rate points to continued economic expansion through the end of the year. An economist for the business research group said remaining uncertainties include business spending, consumer resilience and the effect of slower global growth on U.S. exports.