Consumers showed signs of continued spending in June as retail sales grew, although at a slower annual pace than in April and May. The Commerce Department said nine of 13 categories saw sales rise in June, with declines at gas stations, auto dealerships, home-and-garden stores and restaurants. Factoring out those four volatile categories, core retail sales improved by 0.6%, up from 0.2%  in May. On a year-to-year basis, retail sales increased 4.3% in June, vs. 4.6% in May and 4.7% in April. The average rate for the last 30 years is 4.6% annual growth. 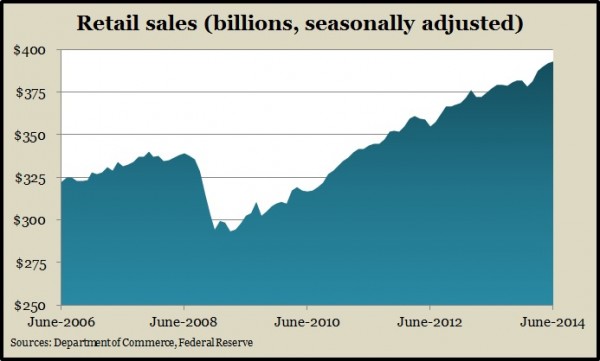 Businesses added lower-than-expected inventories in May, lagging slightly behind the pace of sales, Commerce said in a separate report. The resulting inventories-to-sales ratio stayed even, suggesting businesses are trying to keep stockpiles in line with demand and not risk overbuilding inventory.

Inflation at the wholesale level rose more than analysts expected in June, led by higher gas prices, according to the Producer Price Index. Compared to prices a year earlier, the index increased 1.9%, which marked the third consecutive dip in year-to-year wholesale inflation, the Bureau of Labor Statistics reported. Although closer to the Federal Reserve target of a 2% inflation rate, the decline suggests remaining weakness in demand.

A Federal Reserve report on industrial production and capacity utilization showed manufacturing continuing to rebound in June after a slow start to the year. Output didn’t improve as much as expected, especially after May’s figures came in lower than previously estimated. But capacity usage stayed at the highest level in six years, although still not high enough to spark inflation fears.

A Commerce Department report suggested the housing recovery slowed down in June from recent post-recession peaks. Housing starts dropped 9% off their annual pace in May, putting home building on par with levels before the financial collapse in 2008. Building permit claims, a leading indicator of near-future construction, dipped below an annual pace of 1 million for the second time in nine months.

The four-week average for initial unemployment claims dropped for the second week in a row and stayed below the long-term average, according to a report from the Labor Department. Prolonged indications that employers aren’t letting go of workers would suggest that more hiring is on the horizon as businesses gain confidence and expand.