Consumer spending slipped unexpectedly in June as retail sales declined 0.3%, according to a Commerce Department report. Seven of 13 categories saw sales drop even as the government lowered earlier estimates of sales in May and April. Year-to-year, sales rose 1.4% in June, down from 2.3% in May and a historical average of 4.5%. The report raises some concern because consumer spending drives more than two-thirds of U.S. economic growth, but some analysts cited one-time effects such as an early Memorial Day and weather-related delays to the end of some school years.

Businesses added higher-than-expected inventories in May lagging slightly behind the pace of sales, Commerce said in a separate report. The resulting inventories-to-sales ratio stayed at the same level it has been for four of the last five months, suggesting businesses are trying to keep stockpiles in line with demand and not overbuilding inventory.

Inflation at the wholesale level rose slightly more than analysts expected in June, topping 0 for the second month in a row and only the third time since November. The Producer Price Index, from the Bureau of Labor Statistics, also showed wholesale prices dropping 0.7% from the year before, the fifth consecutive decline. The core index, which excludes volatile food and energy prices, rose 0.8%, staying below the inflation level sought by the Federal Reserve Board to indicate a sustainable rate of economic growth.

A Federal Reserve report on industrial production and capacity utilization showed more growth than analysts expected in June. Hampered by effects of a strong dollar and lower oil prices, the U.S. industrial base marked only its second gain in output this year, with manufacturing unchanged from May. But capacity usage increased for the first time since November and remained below the long-term average, a sign that inflation is still a distant concern. 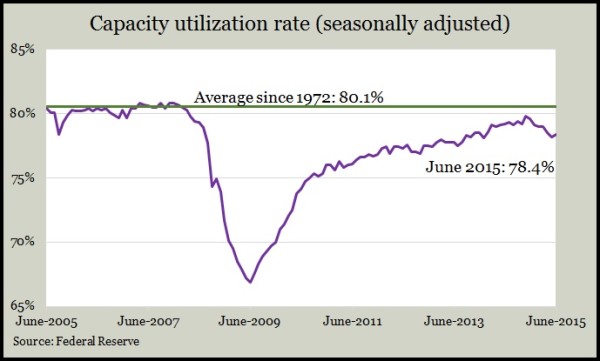 The four-week average for initial unemployment claims rose for the third week in a row and stayed below the long-term average, according to a report from the Labor Department. Prolonged indications that employers aren’t letting go of workers would suggest that more hiring may be on the horizon as businesses gain confidence and expand.

The broadest measure of inflation rose but remained below the Fed’s expectations in June. The Consumer Price Index increased 0.1% from June 2014, the Bureau of Labor Statistics reported. That was the first year-to-year gain in 2015. Excluding volatile food and energy prices, the core index rose 1.8% from a year ago, which is edging closer to the Fed target of 2% inflation. The 58-year average is 3.8%.

A Commerce Department report showed the housing recovery continuing in June, although much of it via multi-family residences. Housing starts rose nearly 10% from their annual pace in May and were up almost 27% from June 2014. Single-family starts actually declined from their May rate. The pace of building permits, a leading indicator of near-future construction, increased 30% from the year before, with authorizations for multi-family dwellings up 79%.

The preliminary reading of a monthly survey from the University of Michigan suggested consumer sentiment eased in the first half of July, though it remains relatively optimistic overall. The index dipped 2.9% from the end of June but was up 14.1% from the same time last year. Analysts consider consumer sentiment a harbinger for consumer spending. An economist with the survey said you’d have to look back more than a decade to see sentiment as consistently elevated as it has in the last eight months.