Credit card debt rose in May for the 42nd month in a row, the Federal Reserve Board reported in its latest look at consumer credit. So-called revolving credit indicates credit card use rose the most since November, a sign that consumers may be more comfortable with spending. Together with non-revolving debt – mostly student loans and car financing, consumer debt rose to a record $18.4 trillion.

U.S. employers posted an annual rate of 5.7 million job openings in May, down 5% from the April pace, which was a little lower than initially reported, the Bureau of Labor Statistics said. At the same time, hiring rose to 5.5 million, an increase of 8.5% – the biggest since 2004. Openings have mostly outrun hires since 2015, suggesting mismatches between demand and supply, which could raise wage pressure. Rising wages help drive consumer spending, which accounts for about 70% of the country’s gross domestic product.

In a sign that the Federal Reserve can afford continued patience in raising short-term interest rates, wholesale inflation barely moved in June. The Bureau of Labor Statistics said the Producer Price Index rose 0.1% from May, including the third drop in energy prices in four months. Excluding energy, food and trade prices, the core index gained 0.2% in June and rose 2% in the last 12 months, which was down from a 2.1% year-to-year rate in May and April.

The moving four-week average for initial unemployment claims rose for the sixth time in five weeks and the highest level since April. Even so, data from the Labor Department show new jobless applications are 31% below the 50-year average. Claims have been below average every week since the beginning of 2013, signaling employers’ longstanding reluctance to let workers go. That should help secure jobs and raise pay enough to fuel consumer confidence and spending.

The University of Michigan said its preliminary consumer sentiment reading for April indicated further optimism, especially based on the highest rating since 2000 for Americans’ feelings toward current conditions. Political partisanship has split consumers’ confidence in future finances, and though such opposing sentiments appear to be converging over time, a university economist said they could create volatility in spending, which drives about 70% of economic activity.

The Federal Reserve Board said a rebound in U.S. manufacturing and a continued comeback in gas and oil output boosted industrial production in June by 0.4%, more than analysts had forecast. Capacity utilization was lower than expected, though at its highest mark in nearly two years. Remaining below the 45-year average rate, capacity utilization is another sign that inflationary pressure is weak. 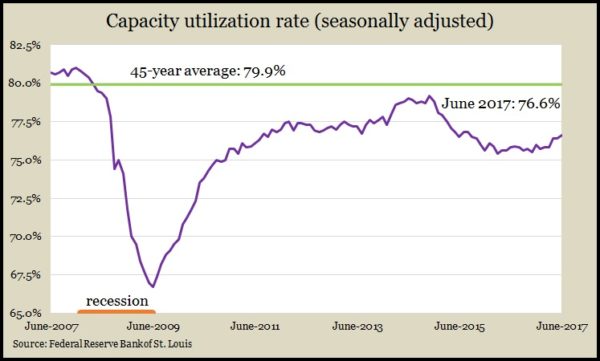 The broadest measure of inflation, the Consumer Price Index, stayed unchanged in June after falling twice in the previous three months. The Bureau of Labor Statistics reported that lower prices for gasoline and groceries helped hold back inflation. The core inflation rate, which excludes volatile energy and food prices, rose 0.1% for the month. Year-to-year, the CPI rose 1.6%, down from 1.9% in May. The core rate rose 1.7% for the second month in a row, staying below the 2% Federal Reserve target.

Another inflation indicator but mostly a sign of consumer spending, retail sales, fell in June for the second month in a row. The Commerce Department reported lower sales in six of 13 major categories, including gas stations and grocery stores but also restaurants. Year-to-year, retail sales rose 2.8% in June, down from 4.1% in May and a 4.3% historical average.

In a separate report, Commerce said business inventories rose slightly while sales declined in May. The mismatch raised the inventories-to-sales ratio, which has been near recessionary levels for more than two years. The ratio suggests how nimbly businesses can adjust production to customers’ demands.