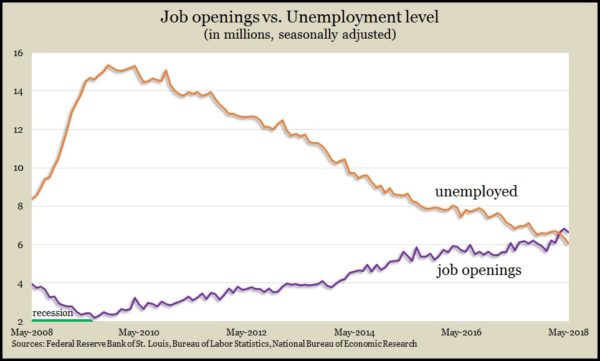 Mostly because of the increased costs of trade services, wholesale inflation rose in June, although at a slower pace than in May. Including volatile prices for food, energy and trade services, the Producer Price Index rose 3.4% from June 2017, the Bureau of Labor Statistics reported. That was the most since November 2011. Excluding volatile categories, the core rate of wholesale inflation rose 2.7% in the last 12 months.

The nation’s wholesalers continued to adjust supplies more closely to demand in May, as inventory levels rose 0.6%, lagging a 2.5% increase in sales, according to the Commerce Department. The inventories-to-sales ratio, a gauge of how lean businesses are operating, dropped to its lowest level since late 2014. Year-to-year, wholesale inventories were up 5.9% while sales had risen 11.8%.

The broadest measure of inflation, the Consumer Price Index, inched up by 0.1% in March, held back by a decline in prices for electricity and natural gas. Year-to-year, the CPI rose 2.9%, its biggest jump since February 2012, according to the Bureau of Labor Statistics, led by a 12% increase in energy prices. Excluding energy and food prices, the CPI grew 2.3% from June 2017, the third increase in a row and the fourth in a row above the Fed’s inflation target of 2%.

The four-week moving average of initial unemployment claims fell for the third time in five weeks, continuing to reflect a tight hiring market in which employers are reluctant to let go of workers. Data from the Labor Department show new jobless applications are 37% below the 51-year average. Claims have been below average every week since the beginning of 2013.