Consumers surprised analysts by using credit cards more than expected in May. Revolving credit card debt had dipped in April but rebounded at the highest rate since before the recession, according to the Federal Reserve. Increased credit card use could be a sign of rising consumer confidence and freer lending by financial institutions. Also, it can indicate that more people are strapped for cash. Consumer credit overall – including car financing and student loans – rose nearly 1% from April and was within 0.3% of the peak set four years ago. 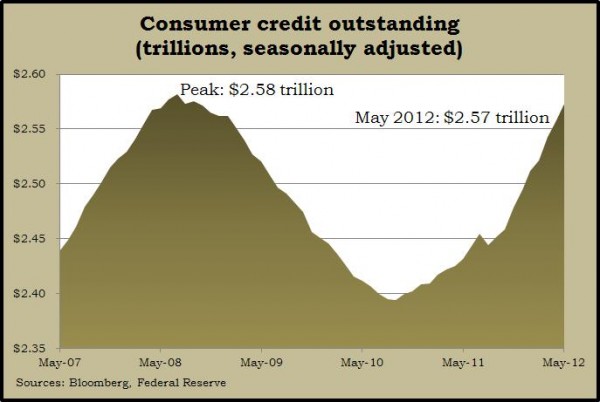 A drop in oil prices lessened U.S. imports in May while exports gained, which led to a smaller trade deficit, the Bureau of Economic Analysis reported. The gap of $48.7 billion was slightly more than analysts had forecast but marked the second month in a row the deficit narrowed. Economists warned that slower economic growth in the European Union, China and other major markets could hamper exporting in the months ahead.

Minutes from the policy-making Federal Open Market Committee expanded on Federal Reserve comments about concern for the U.S. economy and support for more monetary stimulus, if needed. Policy makers are particularly wary of the lackluster labor market, and they have expressed interest in trying to boost economic output without igniting inflation.

The moving four-week average for initial unemployment claims dipped for the third week in a row. It’s now at its lowest level since May, according to the Department of Labor. The trend suggested continued slight progress in the labor market, but the Independence Day holiday and seasonal factory shutdowns may have distorted numbers a bit.

Another indicator of a slowdown in the global economy is demand for commodities, which can affect prices at the wholesale level. The primary measure of that is the Producer Price Index, which surprised analysts by rising slightly in June following three consecutive monthly losses. Food prices nudged up, perhaps reflecting worsening drought conditions in the United States. Energy prices dropped for the eighth time in nine months. Wholesale inflation was up just 0.7% from June 2011, the smallest 12-month increase since October 2009. Core wholesale inflation, which excludes food and energy prices, had an annual rate of 2.6%, the lowest in a year.