The Institute for Supply Management reported that its manufacturing index signaled expansion in December for the seventh month in a row and at the fastest pace since mid-2018. Based on surveys of purchasing managers, the index showed production at its highest level in 10 years. Three in four survey respondents expressed optimism about their businesses, despite reconfigurations in operations forced by the pandemic. Some manufacturers complained of rising staffing constraints as they struggled to bring back employees or recruit new hires.

A report from the Commerce Department showed manufacturing orders gaining in November for the seventh month in a row, though they were still down 1.9% from February, before widespread pandemic shutdowns. The value of orders rose 1% from October, down from 1.3% gains in both September and August. Excluding volatile orders for transportation equipment, orders rose 0.8% for the month. A proxy for business investments reached a record high for the second month in a row.

The four-week moving average for initial unemployment claims declined for the first time in five weeks but remained nearly four times the level just before the pandemic. Average claims were at 818,750, up from a 51-year low of 208,000 in February. Prior to pandemic, the high was 695,000. The Labor Department said 19.2 million Americans were receiving unemployment benefits, more than 10 times the 1.8 million recipients at the same time the year before.

The U.S. trade deficit grew 8% in November, just below its widest gap on record, which was set in August 2006. The $68.1 billion deficit, which detracts from gross domestic product, resulted from the value of imports rising at a faster rate than exports. Imports were up 2.9% from October, while exports rose 1.2%. Year to year, the trade gap rose 13.9% with imports down 10.5% and exports down 16.1%.

The U.S. services sector continued expanding in December, according to the Institute for Supply Management. The trade group’s services index showed the seventh consecutive month of growth following setbacks in April and May. The pace of expansion accelerated from the November index. However, the employment component contracted as more purchasing managers complained of staffing constraints, especially with recent surges in COVID-19 cases.

The U.S. economic recovery staggered in Decembers as employers cut 140,000 jobs, according to a report from the Bureau of Labor Statistics. The job level remained 9.8 million or 6.5% below where it was in February, on par with employment more than five years ago. Hardest hit were jobs in the leisure and hospitality industry, private education and state and local government. The same report showed the unemployment rate steady at 6.7%, which was down from 14.8% in April but much higher than the 3.5% mark set in February. Household surveys showed growing numbers of long-term unemployed, permanent job losers and people suspending their job searches. Nearly 16 million said they were unable to work because the pandemic closed or otherwise reduced their employer’s business. 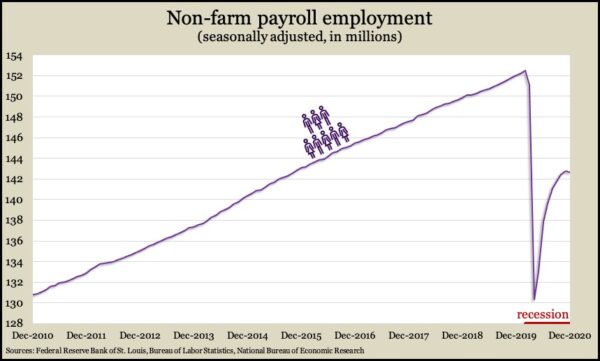 The Federal Reserve reported that consumer credit card debt fell in November for the eighth time in nine months. With consumer spending driving about 70% of U.S. economic activity, credit card debt can signal consumers’ ability and willingness to spend. Since peaking in February, such debt has fallen $120 billion or 10.9%. It took almost 10 years for credit card debt to recover in the last recession.

Store sales rose again in September, further signs of a consumer-driven economic expansion that has not affected al… twitter.com/i/web/status/1…

Our annual #Investment Outlook Seminar is video only again this year. Updating clients and other #investors and… twitter.com/i/web/status/1…