Construction spending unexpectedly slowed for the third consecutive month in November as the seasonally adjusted annual rate of spending dropped to its lowest level since April 2014. The Commerce Department said processing errors reduced previous estimates of spending, particularly within residential construction. Still, housing overall remains a relative bright spot for the U.S. economy because it is more sheltered from the headwinds slower global growth.

Unlike construction, manufacturing takes the brunt of weaker demand from abroad as well as the stronger dollar. The ISM manufacturing index signaled a second straight month of contraction in December, dropping to its lowest level since just after the recession. The measure also reflects cuts in the U.S. energy industry, which has been hampered by a glut of oil worldwide.

The pace of motor vehicle sales shifted lower in December but still capped off a record year for moving cars and trucks. Manufacturer reports gathered by AutoData Corp. showed sales slip nearly 5% from November, but December sales improved 2.5% from the year before. Because of low gas prices and the strong U.S. dollar, imported trucks gained the most last year. Vehicle sales account for about one-fifth of retail spending, which is a chief driver of U.S. economic growth.

Another reminder of the dampening effects of the slower global economy came in a decline in factory orders in November, which fell 0.2%, down three of the last four months. Even excluding transportation equipment, a volatile category, orders dropped 0.3% and were down 6.9% in the last 12 months.

Service businesses expanded in December for the 71st consecutive month, although at a slower pace than in November. The Institute for Supply Management non-manufacturing index showed the largest sector of the U.S. economy continuing to grow despite the challenges holding back manufacturers. Overall, purchase managers expressed optimism about current business conditions and the economy overall.

The moving four-week average for initial unemployment claims dropped for the first time in five weeks, though it remained well below the 48-year average. According to Labor Department data, jobless numbers have stayed under the historic average every week for the last three years. That suggests an ongoing reluctance by employers to part with their workers.

Employers added 2.9 million jobs in 2015, the most since 1999, and the unemployment rate in December stayed at 5% for the third month in a row. The Bureau of Labor Statistics reported further signs of job expansion, including a stronger-than-expected addition of 292,000 positions in December and 50,000 jobs more than previously estimated in October and November. Domestically centered fields such as construction, temporary support, health care and food service hired the most. The average hourly wage declined a penny from November, showing that inflation remains weak. 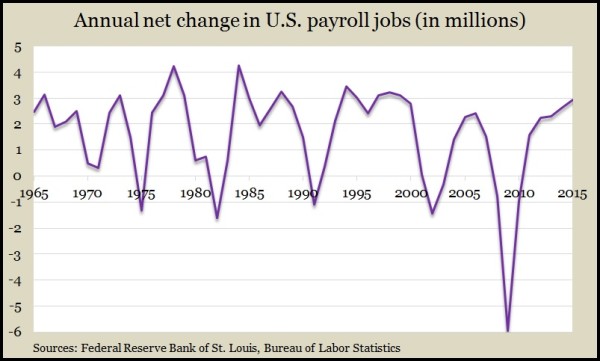 The Commerce Department reported that wholesale inventories fell 0.3% in November while sales declined even more, by 1%. The report suggests companies continue to overestimate demand and may need to slow business to keep it in pace with sales. The inventories-to-sales ratio rose to the highest level since the recession.