U.S. manufacturers reported a 16th consecutive month of expansion in December. Purchasing managers surveyed for the ISM Manufacturing Index reported that new orders grew at the fastest pace in nearly 14 years, consistent with seven months in a row of brisk demand. Export orders and backlogs also reflected well on manufacturing, which could be benefiting both from renewed vigor in economies abroad and anticipation of U.S. tax changes.

An industry much less dependent on global conditions showed continuing promise in November. Construction spending hit an annual rate of nearly $1.26 trillion, the 14th consecutive month above the 2006 peak. The Commerce Department said the pace was up 0.8% from October and 2.4% ahead of the November 2016 pace. A rise in spending on single-family housing led the advance while manufacturing construction declined.

The annual sales pace of motor vehicle sales rose near 17.9 million in December, a sign that consumer spending remains strong. Car sales were off from peaks in September and October, when Gulf Coast residents were replacing vehicles lost to the hurricanes. The rate of vehicle sales rose 1.9% from November and were 3.3% ahead of the 12-month average. Manufacturer reports gathered by Autodata Corp. showed trucks leading all categories.

The moving four-week average for initial unemployment claims increased for the third week in a row, including the bumpy holiday hiring season. Even so, the measure remains 32% below the 50-year average, which it has been below each week for five years, according to Labor Department data. The numbers  suggest employers are reluctant to lose workers amid a tight labor market. 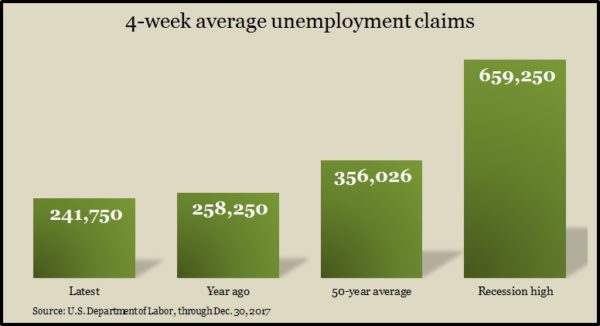 Employers added 148,000 jobs in December, the 87th consecutive increase, according to a preliminary report from the Bureau of Labor Statistics. The number was lower than analysts expected and suggests a slowdown as other indicators show nearly full employment. The unemployment rate remained at 4.1% for the third month in a row, the lowest level in 17 years. Job gains were particularly strong in the health care, construction and manufacturing industries. Retail employment fell both for December and for 2017 as more stores are closing and consumers are shopping online more.

Service businesses expanded in December at a slower pace too, although they notched their 96th consecutive month of growth, according to the Institute for Supply Management Non-Manufacturing Index. Activity in the largest sector of the U.S. economy is suggesting that the nation’s gross domestic product was expanding at a 2.7% annual rate, the purchasing managers group said. Managers surveyed for the report expressed optimism for business conditions and the economic outlook.

The U.S. trade deficit grew 3.3% in November to its widest margin since January 2012. The $50.5 billion gap resulted from a 2.3% rise in exports and a 2.5% increase in imports, according to the Bureau of Economic Analysis. The pickup in exports has been a sign that U.S. companies are benefiting from synchronized growth in the global economy. Imports included equipment for businesses that could help raise U.S. productivity.

In a sign that manufacturing continues to advance, the Commerce Department reported that factory orders rose 1.3% in November, the fifth gain in six months, staying 5.8% above year-ago levels. Excluding the volatile transportation equipment category, orders increased for the sixth month in a row, rising 6.3% from the same time last year. Orders for non-military capital goods excluding aircraft backed off from their highest point since September 2014, which suggested at least a momentary setback in a trend toward greater business investments.