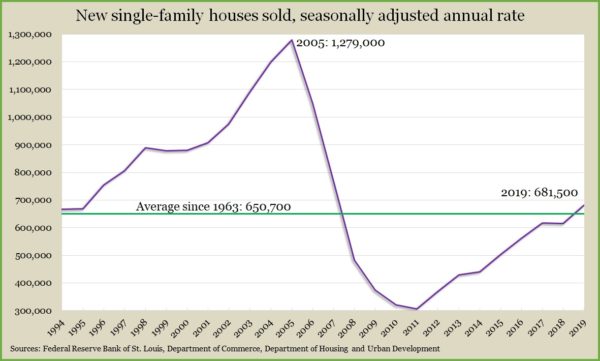 Year-to-year gains in house prices continued to increase in November for the fourth month in a row following a year of deceleration, according to the S&P CoreLogic Case-Shiller home price index. The longstanding monthly index reported a 2.6% 12-month gain for its 20-city composite index.  That’s up from a 2.2% gain in October and a low of 2.04% in July after cresting as high as 6.6% in March 2018.

A leading indicator of consumer spending, consumer confidence, rose in January to its highest level in five months. Consumer attitudes toward current business conditions rose along with their expectations, the Conference Board reported, suggesting continued economic expansion. Consumer spending generates about two-thirds of U.S. economic activity.

Amid recent signs of stronger housing momentum, the National Association of Realtors said its index for pending home sales declined 4.9% in December. The trade group blamed low inventory, especially in affordable housing, for holding back sales despite a strong employment environment and sub-4% mortgage rates. The association forecast a 3% rise in sales in 2020, a 6% gain in housing starts and 10% growth in new-home sales.

The U.S. economy grew at a 2.1% annual pace in the fourth quarter of 2019, keeping stride with the previous three months. The Bureau of Economic Analysis said gross domestic product benefited from a 1.8% increase in consumer spending as well as military purchases, residential investments and a tariff-related decline in imports. Business investments declined for the third quarter in a row, and inventory buildups receded in part because of a temporary autoworker strike. The Federal Reserve Board’s favorite measure of inflation fell to 1.3% from 2.1% in the third quarter.

The four-week moving average for initial unemployment claims fell for the fourth week in a row, reaching its lowest level since October and staying 39% below the long-term average. Labor Department data show claims have remained below the 53-year average every week since early 2013. The trend suggests persistent reluctance among employers to let workers go, which should support consumer confidence and spending.

In December, consumer spending rose 0.3%, slightly faster than the 0.2% gain in personal income, the Bureau of Economic Analysis reported. As a result, the personal saving rate dipped to 7.6% of disposable income, still above the 7.3% post-recession average but below the 8.8% average since 1959. The core PCE index, which the Fed favors for measuring inflation, rose 1.6% from the year before, up from 1.5% in November.

The University of Michigan said its consumer sentiment index rose to 99.8 in January, up from both the month and the year before and near its recent peak of 101.4. An economist with the survey cited low rates of unemployment, inflation and interest rates on top of record gains in personal income and wealth. Consistent reports of personal financial gains have reached 50-year highs, according to the report, indicating continued consumer spending to keep the record economic expansion going.