The annual rate of new home sales rose nearly 12% in December, reaching the fastest pace since June 2008. Total sales for 2014 wound up the best in six years, the Commerce Department reported. The report signaled continued progress in the long, choppy housing recovery. Full-year sales of 435,000 new houses remained a fraction of the 2005 peak of more than 1.3 million. 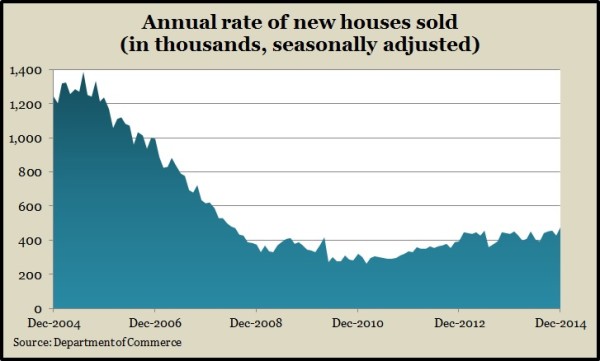 For the fourth time in five months, durable goods orders declined in December, led by a drop in commercial aircraft orders. Even without the volatile transportation sector, orders declined for the third month in a row. The Commerce Department reported that a proxy for business investment slipped for the fourth consecutive month, a sign that the global economic slowdown may be weakening U.S. manufacturing.

Gains in U.S. home prices continued to taper in November, according to the S&P/Case-Shiller Home Price Index. The 12-month increase in the 20-city composite index slowed to 4.3%, marking 12 consecutive diminishing gains since reaching a 13.8% increase in November 2013. A housing economist for Standard & Poor’s said a stronger job market, lower gas prices and greater consumer confidence should help fuel the housing recovery but low inventories and stiff lending requirements remain headwinds.

A foundation of consumer spending – consumer confidence – rose in January to the highest level since August 2007, before the Great Recession. The Conference Board said its monthly index showed consumers’ assessment of current conditions as well as their outlook for the next six months improving. The business research group suggested lower gas costs, better job opportunities and higher stock prices are helping consumers feel better about their prospects.

The National Association of Realtors partly blamed inventory decline and a slight uptick in prices for a 3.7% decline in pending home sales in December. The trade group’s gauge of contracts expected to close in coming months rose 6.1% from the year-before level. With low interest rates and improving consumer confidence, a key to improved 2015 sales is how many homeowners decide to move up, the trade group said. Realtors expect sales to rise 6.6% in 2015.

The moving four-week average for initial unemployment claims fell for the first time in five weeks, although it still remained well below the 48-year average, which it hasn’t exceeded since late 2012. The Labor Department report offered further evidence that employers are relatively hesitant to let current workers go. The more volatile measure, weekly claims, fell lower than expected, but there could be some statistical noise because of the Martin Luther King holiday.

Consumer spending and inventory growth helped the U.S. economy expand in the final quarter of 2013, although drops in federal spending, a widening trade gap and slower business investment slowed the pace from the previous quarter, the Bureau of Economic Analysis reported. The Gross Domestic Product  grew at an annual rate of 2.6% in the last three months of 2014, down from 5% in the third quarter. Consumer spending, which drives 70% of economic activity, reached its fastest pace in nearly nine years at 4.3%. A key measure of inflation showed a 0.5% annual pace, or 1.1% including energy and food. That suggests the Federal Reserve can afford to be more patient about eventually raising short-term interest rates.

Consumer sentiment retreated a tad from mid-January but beat the December measurement and reached its highest point in 11 years, according to Thomson Reuters and the University of Michigan. The reading suggests further advances in consumer spending.