Commitments to buy existing houses rose in November for the first time in eight months, according to the National Association of Realtors. Held back lately by higher mortgage rates and rising prices, pending home sales could still amount to 5.1 million transactions, 10% above 2012 and the highest in seven years, the trade group said. Sales should hold steady in 2014, according to the Realtors, and rise to 5.3 million in 2015.

House prices continued rising in October, based on the S&P/Case-Shiller index, although an S&P economist suggested the size of increases may have peaked. According to the 20-city composite index, year-to-year price gains have reached 13.6% – the eighth month in a row of double-digit increases. Overall prices have recovered to where they were in mid-2008, based on the index. The economist cited a “mixed picture” of housing data and the likelihood of higher mortgage interest rates to keep prices to single-digit gains in 2014.

The cheeriest attitude toward current conditions since April 2008 helped boost consumer confidence in December, the Conference Board reported. After suffering setbacks from the federal government shutdown in October, confidence is climbing again. Consumers’ expectations also rose last month, though a smaller proportion of survey respondents said they anticipate higher incomes in coming months.

Manufacturing expanded again in December, although at a slightly slower rate, according to the Institute for Supply Management. Led by a higher pace of new orders and hiring, manufacturing grew for the seventh month in a row and the 12th time in the last 13 months. Of 18 industries surveyed, 13 reported growth. Respondents generally reported solid year-end business capping off six months of “continuous growth and momentum.”

The Commerce Department said construction spending rose in November, the eighth month in a row, to a level not seen since mid-2009. Residential building led the increase, gaining 1.7% from October and 16% from November 2012. Private commercial construction also grew, cementing the building industry’s recent role in U.S. economic expansion. 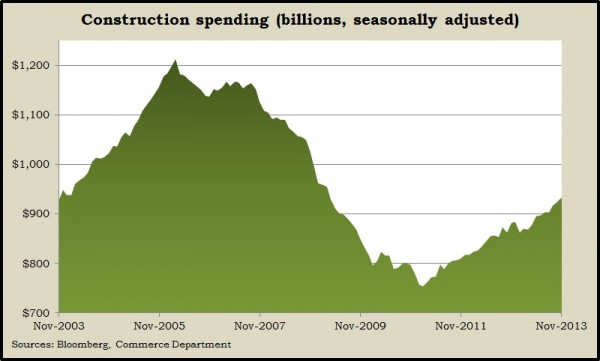 The moving four-week average for initial unemployment claims edged up for the fourth week in a row and showed no improvement from the year before for the first time since the end of 2012. Still, according to data from the Department of Labor, the moving average was 46% below the recession high and remained lower than the 46-year average, suggesting employers are reluctant to let workers go.