The housing recovery continued with a 5.8% rise in house prices in the 12 months that ended in November, according to the S&P/Case-Shiller index. Low mortgage rates, a healthy job market and tight inventory have resulted in higher residential values. While the 20-city composite keeps growing from year-ago levels, the overall index remains 4.8% below the peak set in mid-2006. An economist for S&P noted that housing’s momentum is helping the U.S. economy expand amid the setbacks of low oil prices and a strong dollar. 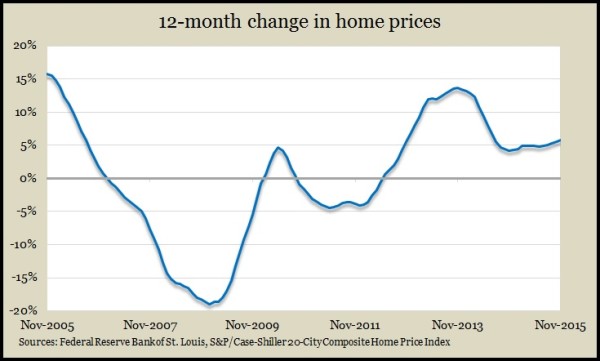 The Conference Board reported that consumer confidence rose more than analysts expected in January. In particular, consumers expressed higher expectations for the next six months. An economist for the business research group said consumers’ views of current and near-future conditions included no ill effects from recent stock market sell-offs.

The annual sales pace of new houses gained more than anticipated in December, rising nearly 11% from November and 10% from the year before, according to the Commerce Department. Although the median sales price declined more than 4% from the year before, inventory dipped to its lowest point in four months, suggesting higher prices in future reports, as long as demand continues.

The National Association of Realtors said pending homes sales barely rose in December, increasing largely because of warmer weather in the Northeast. All the other regions showed fewer contract signings. Still, the trade group’s index was more than 4% above the year-ago pace for the 16th month in a row, suggesting a continuation of the housing recovery. An economist for the association complained of tight inventories and lack of new construction and speculated that recent stock market declines could dampen demand.

Employers continued to be hesitant to let go of workers, according to the moving four-week average for initial unemployment claims. The figure from the Labor Department fell for the second time in four weeks and stayed below the 48-year average – as it has every week for more than three years. Economists expect the lack of layoffs to eventually help increase worker wages, which should benefit the consumer-driven economy.

The U.S. economy grew at a 0.7% annual rate in the fourth quarter, down from analyst expectations as well as the 2% pace in the third quarter. The gross domestic product slowed down because of a lower rise in consumer spending as well as downturns in business investments, inventory buildups and state and local government spending, the Bureau of Economic Analysis said. Exports fell – a sign of the global slump and energy company cutbacks, but services grew – suggesting some resilience in the domestic economy. The personal savings rate rose to 5.4% of disposable income, the highest level in three years.

Americans ended January slightly less upbeat than December, according to the consumer sentiment index from the University of Michigan. While their expectations remained level, consumers’ assessment of current conditions eroded somewhat, due in part to recent stock market declines, a university researcher said. Overall, he said, consumers expect slower economic growth – but not a recession.