The National Association of Realtors said the pace of existing home sales declined 3.6% in December, although 2017 ended with the most houses sold since 2006. An economist for the trade group said demand, fueled by the strong labor market, continues to exceed supply, which has been raising prices and squeezing prospective buyers. Inventory fell year-to-year for 31st month in a row. The median home price increased year-to-year for the 70th month in a row. Realtors sold 5.51 million house in 2017, up 1.1% from 2016 but down 15% from 2006.

The Commerce Department reported that the annual pace of new home sales declined 9.3% in December, following the briskest sales since August 2007. The annual rate of 625,000 houses sold was up 14.1% from December 2017, and the full-year average surpassed 600,000 for the first time in a decade. The median sales price rose 2.6% from the year before, and the inventory of new houses for sale remained below the six-month mark as it has every year since 2011. Housing economists blame lack of supply for escalating prices that are keeping some prospective buyers out of the market. 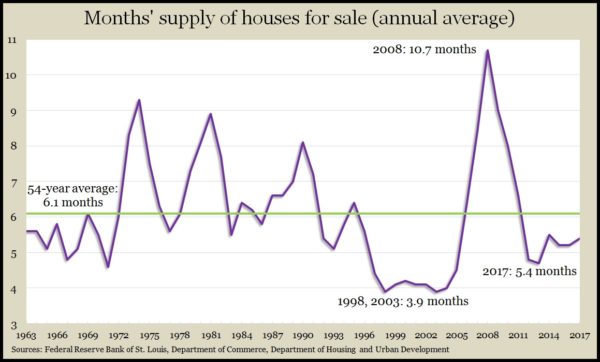 The moving four-week average for initial unemployment claims fell for the second week in a row, settling down after the seasonal volatility of holiday hiring. According to the Labor Department, average jobless applications remain 33% below the 50-year average. Benefits filings have been lower than the long-term level every week since early 2013, a sign that employers are reluctant to let workers go, which should encourage consumer spending.

The Conference Board said its index of leading economic indicators gained 0.6% in December, which was more than analysts anticipated and followed a higher-than-previously-reported rise in November. The business research group cited strength in new factory orders, consumer outlook, stock market prices and financial conditions. It forecast strong economic growth at least in the first half of 2018, with tail winds from the federal tax overhaul.

The U.S. economy grew at a 2.6% annual rate in the fourth quarter, below analyst expectations and down from the 3.2% pace in the third quarter. According to the first of three estimates by the Bureau of Economic Analysis, the gross domestic product benefited from a 3.8% rise in consumer spending along with increased investments in both residential and commercial activity. A slowdown in inventory buildups was the biggest drag on economic growth, along with increased imports. The personal saving rate dropped to 2.6% of disposable income from 3.2% in the third quarter. The preliminary data also showed the Federal Reserve’s favorite inflation gauge at 1.5 for the year, down from 1.9% in 2016 and still lower than the Fed’s target of 2%.

In a separate report, Commerce said durable goods orders rose 2.9% in December, mostly because of a lift in commercial airline orders. Excluding volatile demand for transportation equipment, orders grew at a moderate pace of 5.3% from December 2016, reflecting U.S. manufacturing gains from rising economies across the globe. Non-defense capital goods orders excluding aircraft – a proxy for business investment – declined 0.3% for the first time in six months but increased 5.3% year-to-year.