Sales of existing homes slowed more than analysts expected in December. Sales declined 6.4% from November, according to the National Association of Realtors. For 2018, sales dropped to 5.34 million, the lowest year-end total since 2016. An economist for the trade association blamed mortgage rates, which approached 5% for a 30-year fixed rate in November but has retreated since. Low inventory also has been affecting home sales by raising prices. The median price rose in December from the year before for the 82nd consecutive month. Analysts have become more dependent on Realtors reports as the partial federal government shutdown has stifled official releases of Commerce Department data on such measures as residential construction and new-home sales. 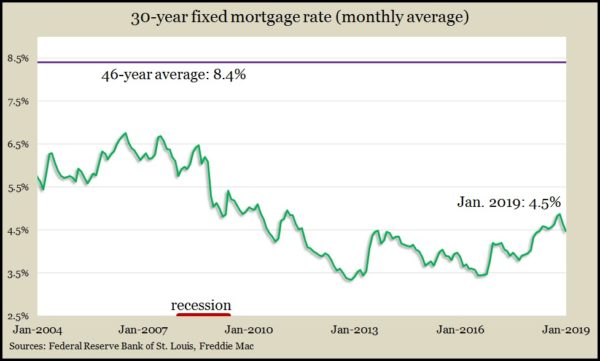 In the week ended Jan. 19, initial claims for unemployment insurance fell to the lowest level since November 1969. The less-volatile four-week moving average dropped for the second week in a row and the fifth time in seven weeks. Data from the Labor Department showed claims continuing to droop more than 35% below the long-term average dating back to 1967. Lower claims suggests ongoing employer reluctance to let workers go amid tight hiring markets, which should boost wages and encourage consumers to spend more. Consumer spending accounts for about 70% of U.S. economic activity.

The Conference Board said its index of leading economic indicators declined 0.1% in December, suggesting economic growth is slowing. Sell-offs of stocks in December, lower consumer expectations and a drop in factory orders held back economic pace, according to the business research group. The Conference Board said the gross domestic product could be slowing to 2% growth by the end of 2019. It had been growing by 4.2% in mid-2018. Effects of the government shutdown have not yet registered on the group’s index, which relies on data from agencies currently closed.