The National Association of Realtors reported that existing home sales dipped 1% in December but rose nearly 13% from the year before, pushing 2012 sales to 4.65 million houses. That’s the highest in five years. Fueled by low mortgage rates yet tempered by strict lending rules, the housing industry continues its comeback. The median price was up more than 11% form the year before – the biggest gain since 2005 and the 10th month in a row of year-to-year increases. 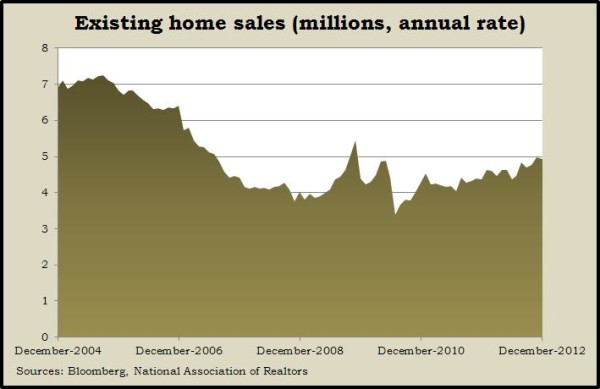 The Labor Department reported that the  moving four-week average for initial unemployment claims reached its lowest point since March 2008, indicating improving prospects for job seekers. The average dipped six of the seven previous weeks and was even below the 45-year average.

The sales rate of new homes dropped in December after much higher revisions for November and October, the Department of Housing and Urban Development said. More significantly, the number of new homes sold rose in 2012 for the first time in seven years, and the median price was the highest in five years. More economists are pointing to a continued rebound in housing as a catalyst for further growth in the broader economy.