The Labor Department reported that the moving four-week average for initial unemployment claims dipped for the third week in row, settling back to its level of early December. The average has remained below the long-term average for more than a year, indicating persistent resistance among employers to let go of workers. 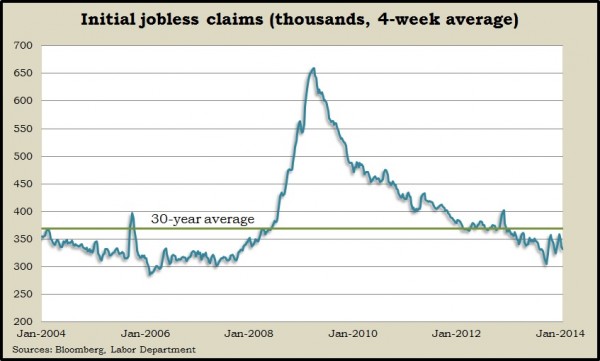 The National Association of Realtors reported that the existing home sales rate gained 1% in December but dipped slightly from the year before, as 2013 sales rose to 5.09 million houses. That’s the highest in seven years. Diminished job growth and limited housing supply slowed sales toward the end of the year, but the trade group sees continued housing recovery in 2014. The list of possible speed bumps include increasing mortgage rates, strict lending rules and low inventories. The median price was up more than 11% from 2012 as foreclosure and other discounted properties account for a smaller share of the sales.

Led by improving stock prices and other financial measures, the Conference Board’s leading economic indicators picked up again in December, signaling continued economic growth into the spring. The business research group said a slowdown in housing construction as well as mixed consumer expectations could present snags, but rising demand should push economic momentum in 2014.