In further evidence of the continued but choppy housing recovery, the Commerce Department reported that U.S. builders started more than 1 million houses in December. That was more than analysts expected and 5.3% above the annual pace the year before. Single-family houses led the increase. The number building permits for future housing declined for the second month in a row. And although bouncing back from the depths of the recession, housing starts remain below the historical average. 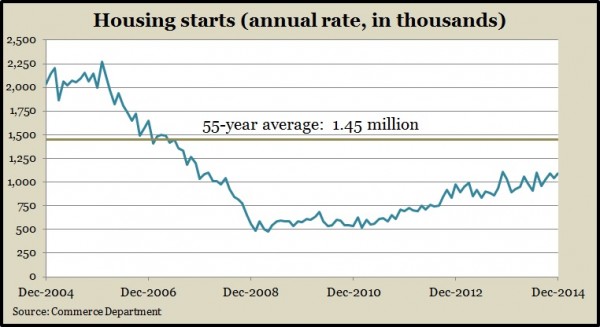 The Labor Department reported that the moving four-week average for initial unemployment claims rose for the fourth week in row, climbing to its highest level since July. Even so, the average has remained below the long-term average for more than two years, indicating persistent resistance among employers to let go of workers.

The National Association of Realtors reported that the existing home sales rate gained 2.4% in December but dipped 3.1% from the year before, as 2014 sales rose to just under 5 million houses. Limited housing supply is expected raise housing prices, which could discourage buyers as wage increases continue to lag home inflation. The trade group reported that the share of buyers who are first-time homeowners reached the lowest level in nearly 30 years.

With eight of its 10 components contributing, the Conference Board’s leading economic indicators increased in December for the fourth month in a row. The business research group said the short-term outlook is improving and the U.S. economy continues to build momentum. Economists for the Conference Board said possible resistance to the pace of expansion could come from weaker numbers from housing construction, industrial production and factory hours.