The housing recovery continued to contribute to the U.S. economic expansion December, with a slower pace of housing starts but a rise in the rate of building permits, suggesting further pickup in activity in coming months. The Commerce Department said the annual rate of new house construction fell 2.5% from November, though still at its third-highest level since the Great Recession. Permits rose to their second-highest level since the recession, with multi-family units outpacing single-family houses.

The broadest measure of inflation remained historically weak in December, reflecting the moderate – not robust – tenor of U.S. economic growth. The Bureau of Labor Statistics showed energy prices continuing to hold back the Consumer Price Index, including a 19.6% drop in gasoline prices since December 2015. In the last 12 months, the CPI rose only 0.7%, not even half the 2% inflation rate targeted by the Federal Reserve Board. Excluding energy and volatile food prices, however, the core CPI rose 2.1% year-to-year, vs. the historical average core rate of 3.8%. 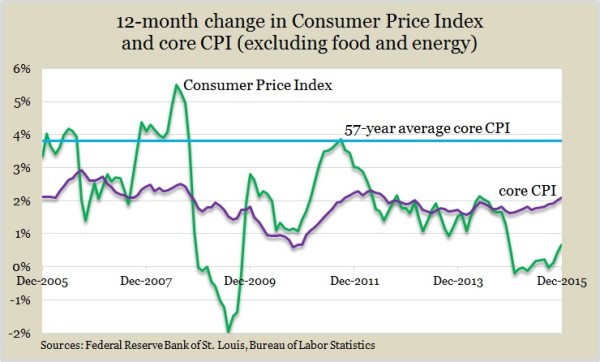 The moving four-week average for initial unemployment claims rose for the second week in a row and the fifth time in six weeks to reach the highest level since April. New applications for jobless benefits continue to be more than 20% below the 48-year average, according to Labor Department data. The recent rise in initial claims could be attributed to seasonal fluctuations that tend to coincide with the beginning of the year.

Aided by some extraordinary circumstances, the annual sales rate of existing houses rose in December to its third-highest point since before the recession. Unseasonably warm weather helped sales, and new closing rules delayed many November deals that were finalized in December. The National Association of Realtors reported a 15-year low in inventory levels, resulting in a 7.6% increase in median price since December 2014, the 46th consecutive year-to-year gain. Some 90% of house sales come from existing residences. The national trade group expects slower sales in 2016.

The U.S. economy should continue moderate growth into 2016, according to the Conference Board’s October index of leading economic indicators. Economists for the business research group said the index declined for the third time in four months largely because of a lack of factory orders and building permits. Although growth has been slowing, the index remains above its level before the recession.