Both food and energy prices slipped in December as wholesale inflation fell for the third month in a row. Food prices in December for the second time in three months. The Bureau of Labor Statistics said the cost of food in the Producer Price Index dropped the most in 18 months. The core index, excluding food and fuel prices, edged up in December and rose 2% in the last 12-months, suggesting economic growth remained modest enough that inflation is not an imminent worry.

The broadest measure of inflation stayed unchanged in December as energy prices dropped for the third month in a row, the Bureau of Labor Statistics reported. Aside from the volatile fuel and food categories, the core Consumer Price Index  was up 1.9% from December 2012, within the range sought by the Federal Reserve.

U.S. production capacity was at its highest rate since July in December, according to the Federal Reserve. Industrial production increased, led by a continued push in manufacturing and overcoming decline by utilities – a function of warmer-than-usual weather. The capacity utilization rate of 78.8% stayed below the long-term average, suggesting room for further growth without threatening inflation.

The labor market continued to show improvement as the moving four-week average for initial unemployment claims dipped for the fifth time in six weeks. Seasonal fluctuations from post-holiday dismissals could be throwing off readings, but the Labor Department showed jobless claims near the lowest levels of the recovery, suggesting improved conditions for jobseekers.

The Commerce Department reported continued progress in the housing recovery in December with the highest rate of housing starts since June 2008. The year-to-year gain of 37% was the largest since 1983. Building permits, which indicate plans for further building, rose less than expected from November but were up 29% from the year before. 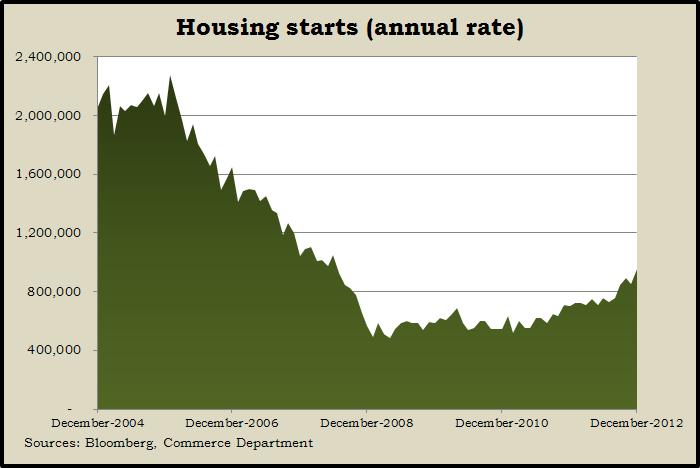 A preliminary reading of the monthly consumer sentiment index from the University of Michigan and Thomson Reuters showed further erosion in how Americans feel about their financial prospects. The index dipped to 71.3 in early January, its lowest mark in 13 months, and down from the recovery high of 82.7 in November. Some economists look to consumer sentiment as an early indicator of consumer spending, which accounts for 70% of U.S. economic activity.