The broadest measure of inflation rose less than analysts expected in December, although year-to-year, the Consumer Price Index gained 2.3%, its biggest increase since October 2018. Higher prices for gasoline, housing and medical care contributed to the gain, according to the Bureau of Labor Statistics. Excluding food and energy, the core CPI also rose 2.3% for the third month in a row, up from a post-recession average of 1.8%.

In a persistent sign of the tight labor market, the four-week moving average of initial unemployment claims continued to trend near 50-year lows. The latest data from the Labor Department show the four-week average dropping two weeks in a row. More volatile weekly claims declined even as analysts were expecting them to rise.

The Commerce Department reported 0.3% higher retail sales in December, set back by a decline in spending at car dealers. Gas stations led the 12 retail categories showing gains, in part because of higher prices. Year-to-year, gas stations and online stores led a 5.8% increase in sales, which exceeded the long-term average of 4.3%. In 2019, sales from online stores overtook those from general merchandise stores. 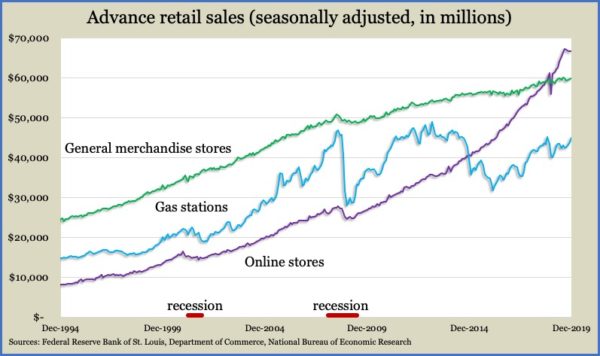 In a separate report, Commerce said business inventories fell 0.2% in November while sales rose 0.7%. Overall, businesses continued to build stockpiles faster than customer demand; inventories rose 2.8% from November 2018 vs. a 1% rise in sales.

The housing market perked up in December with an annual rate of 1.6 million new houses started. The Commerce Department reported that new starts for important single-family houses rose to their highest level since July 2007. Building permits came in lower than expected, but permits for new single-family houses dipped just 0.5% from a post-recession high in November.

The Federal Reserve reported that industrial production contracted in December for the fourth time in six months. Utilities had 5.6% lower output in December when unseasonably warm weather followed a chilly November. Manufacturing production rose for the second month in a row, and mining increased output for the first time in four months. The same report showed capacity utilization, a leading indicator of inflationary pressure, declining to 77%, keeping it beneath the long-term average of 79.8%–which hasn’t been surpassed since 2008.

A preliminary look at January consumer sentiment from the University of Michigan showed little change from the end of December, indicating steady optimism for both current conditions and future prospects. A survey economist said he expects consumer spending to continue to sustain the record economic expansion.

The number of job openings declined in November though remaining at historically high levels. The Bureau of Labor Statistics said employers posted 6.8 million openings, down 7.6% from October. Stores and construction companies had the biggest declines. Workers quitting their jobs continued at relatively high levels, suggesting confidence in the hiring market.