U.S. employers reported nearly 5 million job openings in November, the most since January 2001, according to the Bureau of Labor Statistics. The number of openings rose more than 20% in the latest 12 months while new hires increased by 9%, suggesting an imbalance between the supply and demand of employees. Some economists say that could lead to higher wages, which would further fuel economic expansion.

The Commerce Department said retail sales in December sank more than analysts had expected after slightly weaker sales the previous two months. Lower oil prices accounted for much of the decline, with gas station receipts dropping more than 6% from November and 14% from December 2013. Still, nine of the 13 retail categories had lower sales for the month, suggesting that consumers are not yet spending as much of their gas savings as anticipated. In the last 12 months, retail sales rose by 3.2%, short of the 22-year average rate of 4.6%. 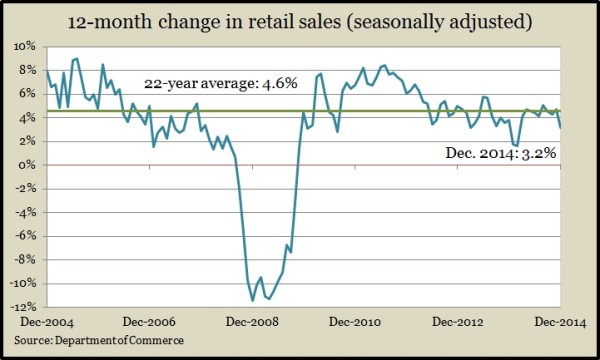 Businesses added 0.2% to inventories in November, equaling the pace of sales increases, the Commerce Department reported. That resulted in no change in the inventories-to-sales ratio, which is not as lean as it was in November 2013, but analysts suggested the two sides remain fairly balanced, and businesses were not getting too far ahead of demand.

The moving four-week average for initial unemployment claims dipped for the fourth time in five weeks. The Labor Department showed jobless claims remaining below the 48-year average, where it has been since the end of 2012, suggesting most employers still don’t want to part with their workers.

The broadest measure of inflation sank 0.4% in December as gasoline and other energy prices dropped for the six month in a row. Aside from the volatile fuel and food categories, the core Consumer Price Index was unchanged from November. The year-to-year inflation rate was 0.8%, the lowest since just after the recession ended, according to the Bureau of Labor Statistics. The core annual rate was 1.7%, still below the 2% ballpark sought by the Federal Reserve.

Production from utilities dropped in December following an extraordinary cold wave in November, sending overall industrial production lower, the Fed reported. Utilities also dragged down U.S. capacity utilization. The less-volatile manufacturing sector increased production for the fourth month in a row and maintained its level of capacity use. Aside from utilities, the report suggested continued moderate economic growth with subdued inflation pressures.

Consumer are more gung-ho about the economy than any time in the last 11 years, according to the University of Michigan and Thomson Reuters. A preliminary reading of the monthly consumer sentiment index suggested Americans are more optimistic because of improving employment markets and lower gas prices. Some economists look to consumer sentiment as an early indicator of consumer spending, which accounts for about 70% of U.S. economic activity.