U.S. employers reported more than 5.4 million job openings in November, nearing the record high in July, according to the Bureau of Labor Statistics. Hiring remained steady, outnumbering separations, which rose slightly. In the latest 12 months, employers created a net increase of 2.6 million jobs, and the number of workers quitting their jobs grew, suggesting greater confidence in finding better work.

The moving four-week average for initial unemployment claims rose for the fourth time in five weeks, reaching its level in six months. Even with the increase, which some analysts attributed to seasonal fluctuation, data from the Labor Department showed jobless claims remaining below the 48-year average, where it has been each week for the last three years. 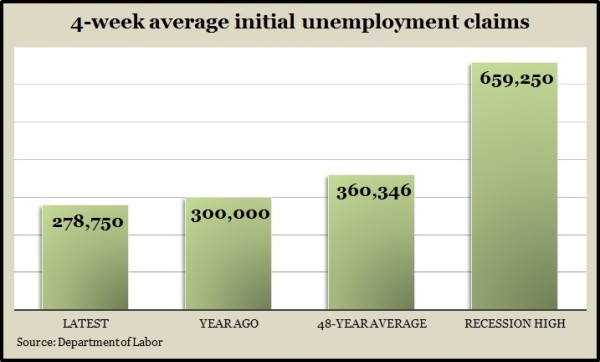 The Commerce Department said retail sales sank in December, which surprised analysts. Even excluding the volatile sales of autos and gasoline, retailers did worse than expected for the holidays. Six of the 13 retail categories had lower sales for the month, suggesting consumers are not yet spending much of their savings from cheaper gas. In the last 12 months, retail sales rose by 2.2%, about half of the average rate for the last 23 years.

The Bureau of Labor Statistics said wholesale inflation dipped in December for the sixth month in a row and the ninth time in 2015. Excluding food and energy prices, the Producer Price Index rose 0.1%, the first gain since June. Year-to-year, wholesale inflation declined for the 11th month in a row. Without food and energy prices, the index rose 0.3%, far short of the Federal Reserve’s inflation target of 2%.

Production from utilities dropped again in December amid unseasonably warm weather while mining and factory production continued shrinking from a slower global economy. The Fed reported that industrial production fell for the third month in a row and was 1.8% lower than the year before. Capacity utilization, an indicator of the prospects for inflation, fell lower for the fourth consecutive month.

Despite not contributing as much as expected to retailers, consumers continue to grow more optimistic about their personal finances, according to the University of Michigan. A preliminary reading of the university’s monthly consumer sentiment index suggested Americans are expecting low inflation rates to make up for lack of wage gains. Some economists look to sentiment as an early indicator of consumer spending, which accounts for about two-thirds of U.S. economic activity.