U.S. consumers amassed more credit card debt in November for only the third time in eight months, suggesting extended reservations about spending. However, overall consumer credit outstanding rose by more than $16 billion, the Federal Reserve reported. About 95% of the increase was non-revolving debt such as auto financing and student loans. Student debt has been rising as more Americans have sought refuge from the job market. 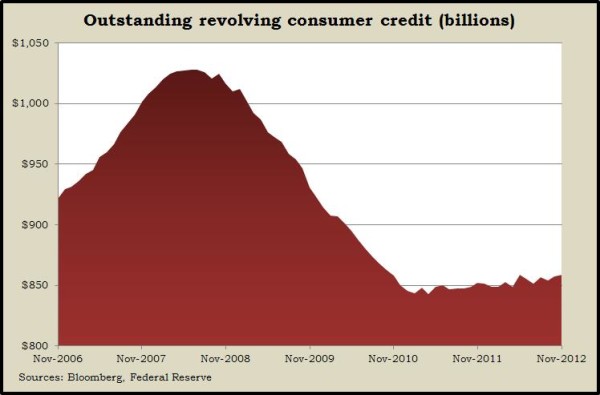 In a sign that businesses may need to step up production or even hire more workers, wholesale inventories rose at a much slower pace than sales in November. The Commerce Department said sales grew at 2.3%, the most in eight months, while inventories increased just 0.6%, which was more than analysts had forecast. The ratio of inventories to sales dipped to its lowest point since May.

The moving four-week average for initial unemployment claims increased for the first time in five weeks, although two holiday-shortened work weeks might have muddied some of the data. The Labor Department reported that the average rose about to the level of claims just before Hurricane Sandy hit the Atlantic seaboard in late October.

Imports and exports both increased in November – signs of continued consumer spending both in the U.S. and abroad. But imports, led by iPhones, outpaced exports, thus widening the U.S. trade deficit, according to the Bureau of Economic Analysis. The $48.7 billion gap between what Americans sell and buy overseas was the biggest since April.