The U.S. non-manufacturing sector grew at its fastest pace in four months in December, exceeding analyst expectations. The Institute for Supply Management said its monthly index marked the 119th consecutive month of expansion for the sector, which represents about 90% of the U.S. economy. Purchase managers surveyed for the index expressed hope that uncertainties about tariffs would be resolved soon. The ISM said the index level corresponds to an annual growth rate of 2.2% for the economy.

The U.S. trade deficit narrowed for the third month in a row, creating the smallest gap since October 2016, according to data from the Bureau of Economic Analysis. The trade gap closed by 8.2% to $43.1 billion as exports rose 0.7% and imports declined 1%. The dip in imports included lower consumption of toys and cellphones from China, which has been engaged in tariff disputes with the U.S.

The Commerce Department reported a 0.7% decline in factory orders in November, dipping for the third time in four months. Excluding the volatile category of transportation equipment, manufacturing demand rose 0.3% from October but was up just 0.1% from November 2018. A proxy for business investments, which has been lagging overall economic growth, rose for the second month in a row.

The Federal Reserve Board reported that outstanding consumer debt, excluding mortgages, rose by $12.5 billion in November. The gain was up 3.6% on an annual basis, including a 5.8% annualized growth in non-revolving debt such as student loans and car financing. Credit card debt decreased at a 2.7% annual pace, suggesting slower consumer spending, which drives about 70% of U.S. economic activity.

The four-week moving average for initial unemployment claims fell for the first time in five weeks, according to data from the Labor Department. The level of new jobless applications was 36% below the 53-year average. Claims have been below average every week since the beginning of 2013, signaling employers’ longstanding reluctance to let workers go.

U.S. employers added 145,000 jobs in December, the 122nd consecutive month of gains, but figures from the Bureau of Labor Statistics suggested slowing growth. The addition was 21% below the three-month average. For the year, employment grew by 2.1 million jobs, down from 2.7 million in 2018. Average wages rose 2.9% from the year before, the first time since September 2018 that wage growth dipped below 3% The unemployment rate remained at 3.5%, a 50-year low. 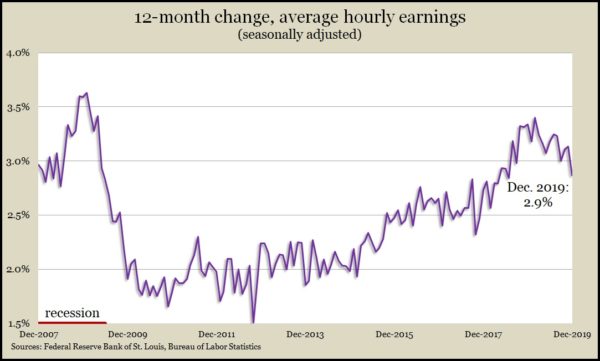