In another sign of momentum in the manufacturing sector, factory orders rose in November for the second time in three months and at a 1.8% rate, exceeding analyst expectations. Commercial airline orders led the latest surge, but even factoring out the volatile transportation category, broad demand for manufactured goods expanded for the second month in a row, the Commerce Department reported.

Service businesses expanded in December, although at a slower pace than in the previous two months. Still, the biggest segment of the economy grew for the 48th month in a row, according to the Institute for Supply Management non-manufacturing index. Overall, purchase managers reported stable business conditions and more hiring activity.

The U.S. trade deficit shrank to its narrowest gap in four years in November, the Bureau of Economic Analysis said. Not only did greater domestic oil production reduce the need for petroleum imports but exports advanced to their highest point ever, suggesting that global economic demand is rising. 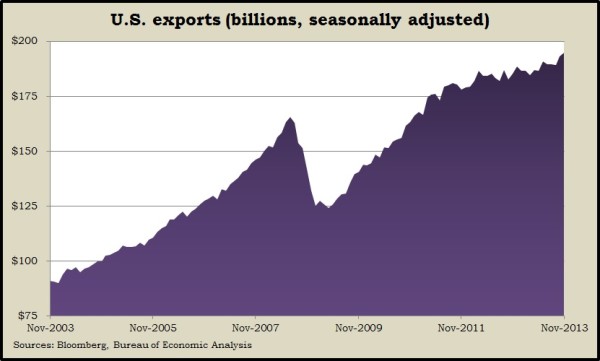 U.S. consumers incurred more credit card debt in November for the first back-to-back monthly increase since February, the Federal Reserve reported. The gain hints at budding confidence, which often results in more consumer spending, the generator of 70% of U.S. economic activity. Much of the monthly increase in consumer credit outstanding continued to flow from student and auto loans.

The moving four-week average for initial unemployment claims dropped for the first time in five weeks, although two holiday-shortened work weeks might have muddled some of the data. The Labor Department reported that layoff levels remained below the 47-year average, signaling employers’ reluctance to let workers go.

Employers hired at a much slower pace than expected in December, and the unemployment rate dropped but mostly because of fewer Americans in the labor force. The Bureau of Labor Statistics said non-farm payrolls grew by 74,000 jobs in December, the least since January 2011. The gain was a fraction of the monthly average for the last two years. Nearly four years after hitting the low tide of the recession, employment remains almost 2.2 million jobs short of where it was in December 2007. Meantime, the unemployment rate dipped to 6.7% from 7% in November and 7.9% in December 2012.

Suggesting a lean approach by businesses preparing for expected demand, the Commerce Department reported that wholesale inventories rose at half the pace of sales in November. However, sales of durable goods contracted for the month while inventories continued to grow, setting up a possible slowdown in production to get supplies in line with demand.