In a sign of continued U.S. economic expansion, the ISM Non-manufacturing Index showed growth in January for the 96th month in a row. The survey-based report from the Institute for Supply Management indicated that the pace of expansion was accelerating for the first time in three months. Survey respondents expressed optimism in business conditions and said they expected a boost from the federal tax overhaul.

The values of both imports and exports rose to record levels in December, although imports grew faster, so the U.S. trade deficit widened, according to a report from the Bureau of Economic Analysis. The trade gap expanded by 5.4% to $53.1 billion in December. The full-year deficit widened 12.1% in 2017 to $256.6 billion – the largest since 2008. Global economic growth and lower exchange rates have helped increase U.S. exports while stronger spending by American consumers have contributed to more imports.

American employers had an annual rate of 5.8 million job openings in December, down slightly from November and still below a record high in September. Openings continued to outnumber new hires, according to data from the Bureau of Labor Statistics. Since January 2015, a gap between openings and hires has suggested unmet employment needs. The number of workers quitting their jobs rose by 3.1%, suggesting greater confidence in the employment market.

Total consumer debt outstanding grew at a 5.8% annual rate of $18.4 billion, the Federal Reserve reported. Financing for cars and student loans rose at a 5.7% rate in December, down from 8.6% the month before. A measure of both consumer confidence and spending is the level of credit card debt, which reached a record high in December for the second month in a row. Credit card debt rose 6% on an annual basis, which was down from a 13.1% gain in November.

The moving four-week average for initial unemployment claims fell to its lowest level since March 1973, dropping below the 51-year average for the 265th consecutive week. Data from the Labor Department continue to show persistent reluctance to let workers go, which strengthens consumer confidence, encouraging the consumer spending that fuels about two-thirds of U.S. economic growth. 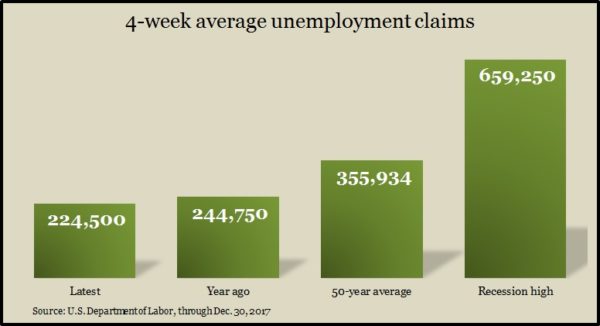 In a sign that companies continue to try aligning supplies closer to demand, wholesale inventories rose 0.4% in December, vs. a 1.2% gain in sales. Year-to-year, inventories rose 3.4% while sales increased 9.1%. The Commerce Department reported that the inventories-to-sales ratio declined to the lowest level since late 2014. The ratio, which indicates how leanly businesses are operating, is about where it was at the end of the recession.