A sign of moderate manufacturing momentum came from increased factory orders in December. The Commerce Department said the December gain followed a slight setback in November orders. Commercial aircraft helped lift the data, which tend to be bumpy month to month. Although not the driving force in economic growth, as it was coming out of the Great Recession, manufacturing continues to hold its own.

The Institute for Supply Management’s non-manufacturing index dipped slightly in January, but continued to signal expansion for the biggest segment of the economy. After hitting a 10-month high in December, the index showed business activity and new orders slowing while hiring picked up and exports grew. The majority of purchasing managers surveyed expressed optimism about the overall direction of the economy and business conditions.

American labor productivity declined more than expected in the final quarter of 2012 as output barely budged compared to the number of hours worked. That could lead to more hiring, if employers feel they’re squeezing all they can from the work force they have. The Bureau of Labor Statistics said its preliminary figures also showed unit labor costs rising at an annual pace of 4.5%, but that might be inflated by some employers accelerating pay at year-end in anticipation of 2013 tax changes.

The moving four-week average for initial unemployment claims dipped for the third time in four weeks, remaining below the long-term rate and hitting the lowest level in nearly five years. The lack of layoffs could indicate continued gradual improvement in hiring conditions.

A report by the Federal Reserve suggested a lingering reluctance by American consumers to spend money. Overall consumer credit rose again in December, propelled by non-revolving debt such as student loans and vehicle financing. Outstanding revolving credit – chiefly credit card debt – dipped for the month, staying in a fairly flat pattern that indicates consumer spending has yet to kick in. Such spending accounts for 70% of U.S. economic activity. 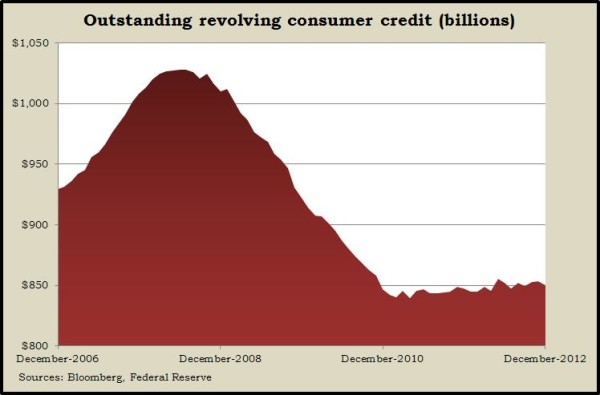 Exports grew while imports contracted in December, resulting in a narrower U.S. trade deficit, the Bureau of Economic Analysis reported. Shipments of industrial supplies, petroleum and aircraft boosted exports to the second-highest level ever. Imports dropped with a decline in oil shipments from abroad as well as a sag in consumer electronic imports following large November imports of iPhones.

Wholesale inventories shrank in December for the first time in six months, perhaps in part responding to uncertainties surrounding year-end fiscal noise. The ratio of inventories to sales remained relatively lean, according to the Commerce Department, which could lead to increased production and hiring as sales improve.