The Institute for Supply Management reported its manufacturing index rose to a reading of 50.9 in January, suggesting expansion in the sector for the first time in six months. The index, based on surveys of purchasing managers, showed growth in new orders, production, export orders and imports. The trade group said results were consistent with overall U.S. economic growth of 2.4% a year.

The annual rate of construction spending declined 0.2% in December to $1.33 trillion, the Commerce Department announced. Full-year spending fell 0.3% from 2018, though residential expenditures increased by 5.8%. Government spending on construction rose 11.5% from 2018, led by work on highways and streets.

Thanks in part to military spending, factory orders rose in December for the second time in three months, increasing 1.8%. Excluding defense items, though, orders declined 0.6%. For the year, factory orders overall declined but gained 0.3% excluding volatile orders for transportation equipment. A proxy for business investment rose 0.7% from December 2018.

U.S. sales of motor vehicles accelerated 1.2% in January to an annual rate of 16.8 million cars and light trucks. The Bureau of Economic Analysis said the pace was 0.8% ahead of the same time last year. Data showed that light trucks including SUVs rose to a record high of 75% of vehicles sold. 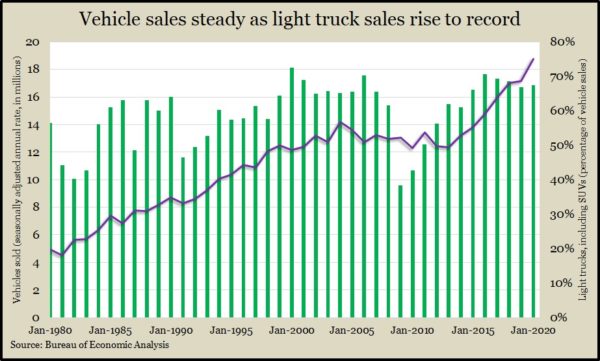 In a sign of continued record U.S. economic expansion, the ISM Non-manufacturing Index showed growth in January for the 120th month in a row. The Institute for Supply Management indicated that the pace of expansion had grown for the second consecutive month. Purchasing managers surveyed expressed optimism in overall business conditions but said they had continued concerns about the tight labor market.

The U.S. trade deficit expanded 11.8% to $48.9 billion in December, but the full-year gap narrowed for the first time in six years, the Bureau of Economic Analysis reported. In a volatile year marked by trade wars, safety concerns with certain Boeing aircraft and a brief strike by U.S. auto workers, the trade deficit declined 1.7%. Exports fell 0.1%, and imports contracted by 0.4%.

The four-week moving average for initial unemployment claims fell for the fifth week in a row to its lowest level since April. Employers have been letting go of workers at the most conservative pace in 50 years, according to Labor Department data.

Friday
U.S. employers added 225,000 jobs in January, more than analysts expected and more than both the three-month and 12-month averages. January marked the 112th consecutive monthly gain in jobs. Average wages rose 3.1% from the year before. The Bureau of Labor Statistics said the unemployment rate rose to 3.6% from a 50-year low of 3.5% in December, largely because 183,000 more job seekers entered the market.