U.S. manufacturing kept growing in January although at a slower rate, according to the Institute for Supply Management. Some purchase managers blamed weather for the slowdown as new orders especially dropped from their December pace. Manufacturing has been expanding for eight months in a row.

The pace of motor vehicle sales dipped in January, according to Autodata Corp. Although some analysts blamed the weather, it was the second consecutive monthly decline for auto sales after reaching a six-year high in November. At an annual rate, dealers sold 15.2 million cars and trucks in January, up slightly from the year before.

Another mixed signal on manufacturing’s momentum came from decreased factory orders in December, the second dip in three months. The Commerce Department said a decline in commercial aircraft orders let the losses, but excluding the volatile transportation category, orders rose for the third month in a row. Shipments fell for the first time in six months while inventories rose for the 12th time in 13 months, suggesting businesses may be making more than customers want to buy right away.

The Institute for Supply Management’s non-manufacturing index rose in January signaling expansion for the biggest segment of the economy for the 48th month in a row. Most components showed activity at a faster pace than in December, including hiring, which hit a three-year high. Some purchasing managers reported weather-related slowdowns, but most said business is improving and they feel positive about the economy.

The annual rate of U.S. labor productivity rose 3.2% in the final quarter of 2013 as output grew 4.9% and the number of hours worked gained 1.7%. Unit labor costs fell 1.6%, the Bureau of Labor Statistics reported, a steeper decline than analysts expected. It marked the third time in four quarters that labor costs fell, suggesting a lack of inflation pressure. 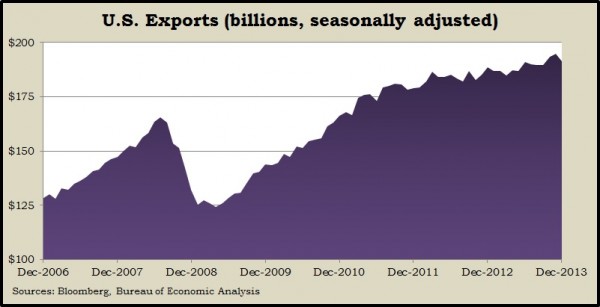 The moving four-week average for initial unemployment claims increased for the second week in a row while remaining below the long-term rate, according to data from the Labor Department. The lack of layoffs could indicate continued reluctance by employers to let workers go.

The Bureau of Labor Statistics’ monthly employment report offered for mixed messages for January. Payroll data showed employers adding 113,000 jobs since December, lower than expected and below the 12-month average of 194,000. The government continued to cut payroll, while goods-producing jobs gained at a faster rate. The bureau’s usually less-reliable household survey indicated that 616,000 more people were working than in December, which lowered the unemployment rate for 6.6% from 6.7% in December.