Manufacturing contracted in January for the fourth month in a row following three years of expansion, according to the Institute for Supply Management. The trade group’s manufacturing index showed the toll that weak global growth is taking on U.S. companies. New orders and production showed signs of expansion again in January, which slowed the rate of contraction for the index overall.

The Commerce Department provided more evidence of housing’s revival, although total construction expenditures in December increased less than analysts expected. Spending on residential building – accounting for more than one third of the total – rose slightly from November and gained 8.1% from the year-ago pace, remaining a significant contributor to the moderately growing U.S. economy.

Consumer spending – accounting for more than two-thirds of U.S. economic activity – didn’t budge in December, according to the Bureau of Economic Analysis. Even though personal income gained a decent 0.3% from November, consumers elected to pocket the money, raising the personal savings rate to 5.5% of disposable income, tied with October as the highest rate in three years. On a year-to-year basis and adjusting for inflation, consumer spending is just above the average growth rate since 1999. 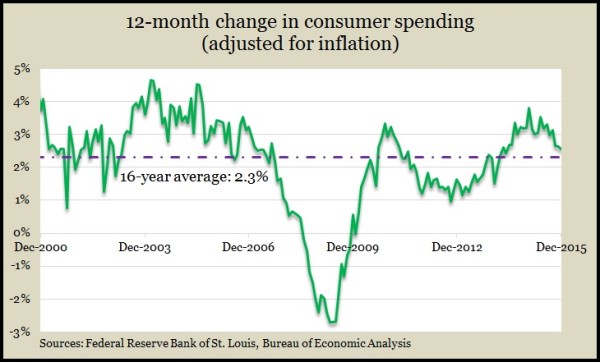 Besides increased savings and continued housing expenses, consumers also continued activity at auto dealers, fueling an annual pace of 17.6 million motor vehicles in January. The pace of auto sales picked up for the first time since October, when it reached a 12-year high. Trucks sold more briskly than cars, and U.S.-made rose faster than imports, according to statistics from the trade group Autodata Corp.

Non-manufacturing accounts for the majority of the U.S. economy, and although it grew at a slower pace in January, for the third month in a row, it registered expansion for the 72nd consecutive month, according to the ISM Non-Manufacturing Index. Purchase managers surveyed for the index expressed overall confidence in business conditions but said they worry about possible fallout on customers’ confidence from a slowing global economy and recent stock market volatility.

The Bureau of Labor Statistics reported a decline in worker productivity in the fourth quarter of 2015, the first setback in output per hour worked in three quarters – although the third dip in five quarters. Output fell at an annual rate of 0.1% in the last three months of 2015 while hours worked rose 3.3%. Productivity has been weak in recent years, rising 0.7% for all of 2015, vs. average growth of 2% a year since World War II.

Led by demand for commercial aircraft, factory orders dropped off in December for the fourth time in five months. Even excluding the volatile transportation equipment category, orders fell, the Commerce Department reported, reflecting the continued uphill battle of doing business abroad when the strong dollar adds to the price of U.S.-made merchandise.

The moving four-week average for initial unemployment claims rose for the third time in four weeks, though it still remains 21% below the 48-year average. Labor Department data show claims continued to remain at levels suggesting a persistent reluctance among employers to let go of their workers.

The effects of the global economic slowdown and the strong dollar showed up in the December U.S. trade deficit, which widened more than analysts expected. The Bureau of Economic Analysis said the trade gap grew by 2.8% from November to $43.4 billion. Exports declined 0.3% while imports increased by 0.3%, which actually could be an encouraging reflection on U.S. consumer and commercial demand.

Employers added fewer jobs than expected in January and fewer than recent months, but the latest figures from the Bureau of Labor Statistics still show a relatively healthy job market. The unemployment rate dipped to 4.9%, the lowest since before the 2008 financial collapse. Stores, restaurants, bars and health clinics keep adding the bulk of jobs, but food processing plants, furniture factories, construction sites and consulting offices were in the mix – all tied more to the domestic than to the global economy.