Although the annualized rate of housing starts dipped in January, a surge in single-family house construction furnished more evidence of the U.S. housing recovery. Data from the Commerce Department showed new single-family units starting at the highest rate since 2008. The rate for multi-family dwellings declined. But building permits, a chief indicator of future construction, rose to the highest rate in nearly five years.

Inflation at the wholesale level was slightly lower than analysts expected in January as higher food and pharmaceutical prices were offset by the fourth consecutive monthly drop in energy costs, the Bureau of Labor Statistics reported. The Producer Price Index was up 1.4% from January 2012, a sign that the economy is still too weak to threaten significant inflation.

Employment conditions continue to moderately improve as the moving four-week average for initial unemployment claims stayed at levels not seen since mid-2008. The Labor Department reported that the average rose for the second week in a row but remained below the long-term level and near the low for the recovery.

The broadest measure of inflation stayed flat in January, for the second month in a row. The Bureau of Labor Statistics said energy costs, led by gasoline, fell for the third consecutive month. Food prices were unchanged, but costs for apparel, air fare and hotel stays rose slightly. Year-to-year, the Consumer Price Index showed an inflation rate of 1.6%, well within the safety zone set by the Federal Reserve and lower than the average rate of 2.9% dating back to 1983. 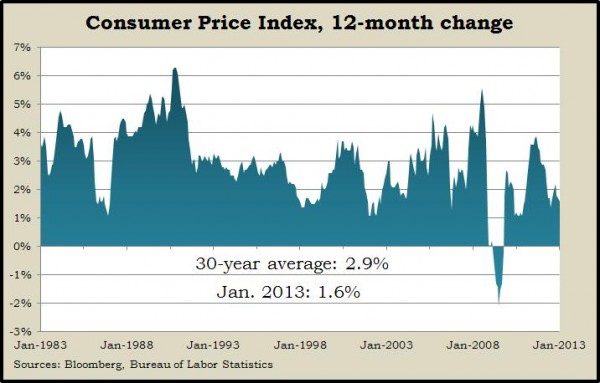 Another sign of housing’s revival came from the National Association of Realtors report on existing home sales in January. The annual rate of transactions topped analysts’ expectations and showed the 11th month in a row of year-to-year median price increases. With inventories at a 12-year low and mortgage rates historically cheap, the trade association said supply is falling short of demand, resulting in a seller’s market that should keep pushing prices higher.

In fact, housing is a main reason the U.S. economy will continue its “sound but sluggish” expansion, according to economists at the Conference Board. In announcing a January advance in its leading economic indicators, the business research group said that housing is helping to offset recent weakness in factory orders and consumer sentiment to sustain the nation’s mild recovery.