Inflation on the wholesale level rose higher than expected in January, mostly because of a jump in the cost of trade services. The Bureau of Labor Statistics said the Producer Price Index increased 0.5% from December, bringing the year-to-year rise to 2.1%. It was the measure’s first mark above 2% since May. Excluding volatile costs for trade services, food and energy, wholesale inflation rose 1.5% from January 2019, the same pace as December, still below the Federal Reserve target of 2% inflation overall.

The U.S. housing market continued to build in January with nearly 1.6 million new houses started at an annual rate. The departments of Commerce and Housing and Urban Development said the pace of housing starts declined 3.6% from December but was up 21.4% from January 2019. Building permits authorizing further construction also exceeded 1.5 million a year, with the pace of single-family permits up nine months in a row to its highest level since June 2007. Completions of single-family houses, which help address a longstanding inventory shortage, declined for the third month in a row. 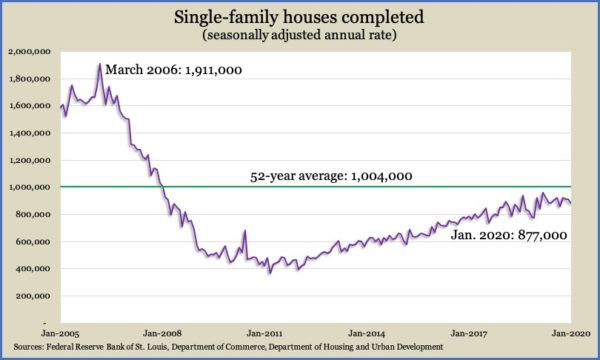 The four-week moving average for initial unemployment claims fell for the sixth time in seven weeks to the second-lowest mark since hitting a 50-year low last April. The layoff level has been below the 53-year average for more than six years, according to Labor Department data, highlighting a tight labor market that should encourage more consumer spending.

The Conference Board’s index of leading economic indicators jumped 0.8% in January after showing a negative growth rate for the second half of 2019. The business research group said the index rose on fewer jobless claims, more building permits and higher stock prices. It expressed concerns about the effect of the latest coronavirus on the recovery of manufacturing. The Conference Board forecast that the U.S. economy will grow at a 2% annual rate at least through the first half of 2019.

The National Association of Realtors said the average annual rate of existing home sales declined 1.3% in January to 5.46 million houses, which beat analyst expectations. The trade group described the outlook for home sales in 2020 as “promising,” in part because of low mortgage rates. A shortage of houses for sale continued to raise prices, with the median sale up 6.8% from the year before. The inventory of houses on the market reached the lowest point since 1999, according to the Realtors. Year-to-year, the median price rose for the 95th month in a row.