The annualized rate of housing starts dropped 2% in January, remaining above the 1 million and up nearly 19% from the year-ago pace. The monthly decline was led by a slowdown in single-family houses. Data from the Commerce Department showed building permits also slowed from the December rate, dropping more than analysts expected. Overall, the report suggested continue choppiness in the housing recovery. The rate of housing starts is still less than half what it was at its peak before the recession.

Inflation at the wholesale level sank by 0.8% in January, the biggest slide in more than five years of data. Energy prices fell a record 10% from December, according to the Producer Price Index, from the Bureau of Labor Statistics. Even without the volatile food and energy prices, the index declined from December. The year-to-year wholesale inflation rate was unchanged, suggesting economic growth remains much weaker than Federal Reserve targets.

U.S. industrial production rebounded slightly in January from a contraction in December, although growth was still less than analysts expected. The Federal Reserve said manufacturing output barely rose after no change in December, indicating that hesitations in the global economy may be starting to take a toll on U.S. industries. Capacity utilization stayed even with the December rate of 79.4%, down from the long-term average of 80.1%, a sign that companies have further room for growth before triggering higher inflation. 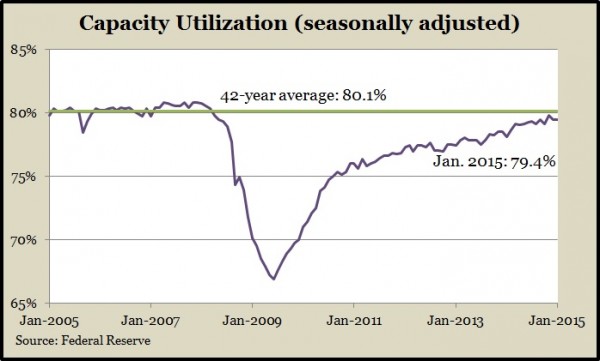 Employment conditions continued to improve, according to the moving four-week average for initial unemployment claims. The Labor Department reported that the average fell for the fourth week in a row, reaching its lowest level since early November, when it hit a 15-year low. The measure has remained below the long-term average for 25 months, suggesting employers are persistently reluctant to let workers go.

The U.S. economy will continue expanding in coming months, although with less momentum, according to leading economic indicators followed by the Conference Board. January gained less than December, the business research group said, citing weaker housing construction and slowing factory orders as possible headwinds in coming months.