Wholesale inflation was higher than analysts expected in January but continues to indicate a lack of robustness in the economy. The Bureau of Labor Statistics said the Producer Price Index rose for just the second time in six months. The year-to-year inflation rate at the wholesale level declined 0.2%, increasing to 0.6% if you ignore food and energy prices. The Federal Reserve considers 2% inflation a sign of healthy economic growth. 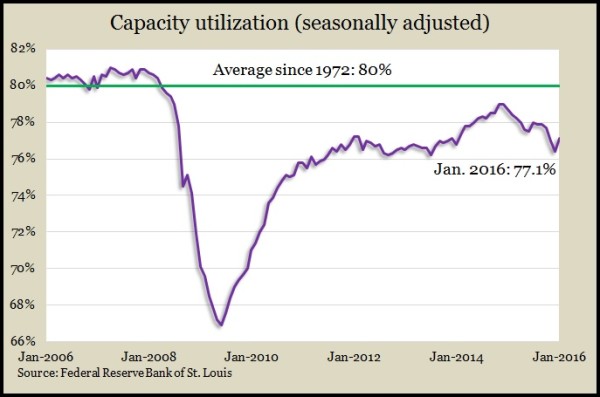 The up-and-down housing recovery continued on a down note in January, with both housing starts and building permits slowing pace more than analysts expected. The Commerce Department said the annual rate of new house construction dipped 3.8% from December, the second consecutive decline. Building permits, an indication of future construction, declined 0.2%, with single-family houses dropping and multi-family units gaining.

The moving four-week average for initial unemployment claims fell for the third time in four weeks, dropping to the lowest level since mid-December. Data from the Labor Department suggest employers continue to have little interest in losing the employees they have, which should help lead to a sense of job security and eventually higher wages. Jobless claims are 24% below the 48-year average and have been that level each week for more than three years.

The U.S. economy should continue modest growth at least through the first half of 2016, according to the Conference Board’s January index of leading economic indicators. Even though the index declined for the second month in a row, it reached its highest point in a decade in November. Also, the chief factors cited by the business research group as dragging down the index last month – the January stock sell-off and a rise in unemployment claims – both have dissipated recently.

Inflation showed signs of nudging up, perhaps reflecting the Federal Reserve’s notion of sustainable economic growth in January. The Consumer Price Index, the broadest measure of inflation, rose 2.2% from the year before but only after excluding food and fuel costs. That was the highest measure for the indicator since June 2012. Including the volatile food and energy categories – including gasoline, which has dropped in price by 29% since January 2015 – the CPI gained 1.4%, according to the Bureau of Labor Statistics.