The broadest measure of inflation increased more than analysts expected in January. The Consumer Price Index rose 0.5%, the most in five months, highlighted by a 3% gain in energy prices. Apparel prices rose 1.7%, the most since 1990. Excluding food and energy items, the CPI rose 0.3%, the Bureau of Labor Statistics reported. The broader index grew 2.1% from January 2017, and excluding food and energy, core prices rose 1.8% in the last 12 months – still below the Federal Reserve’s longstanding inflation target of 2%.

A key measure of consumer spending – retail sales – declined in January, below analyst expectations of a gain. The Commerce Department said that eight of 13 retail categories had higher sales in January. The outliers included building centers, car dealers and beauty shops. Year-to-year, retail sales rose 3.6%, beneath the 20-year average of 4.3%. Consumer spending accounts for more than two-thirds of U.S. economic activity.

Business inventories rose less than sales in December, according to a Commerce Department report. As a result, the inventories-to-sales ratio remained at its lowest level in two years, near where it was at the end of the recession. The lower ratio suggests businesses are trying to more closely align supply with demand. Year-to-year, inventories rose 3.2% while sales rose 6.7%.

The Federal Reserve reported that industrial production declined up in January, held back by the mining sector. Output fell 0.1% from December, the first setback in five months. Manufacturing production was unchanged for the second month in a row. Capacity utilization shrank to 77.5%, even farther from the long-term average of 79.8%, above which economists begin to worry about inflationary pressure. That average hasn’t been touched in more than three years. 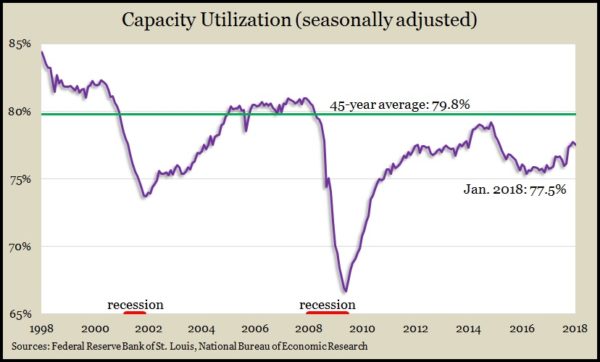 Inflation on the wholesale level rose 0.4% in January, about where analysts expected it. A 7.1% in gasoline prices led the increase. Excluding volatile food and energy costs and trade margins, the Producer Price Index  also rose 0.4%, the highest in nine months, according to the Bureau of Labor Statistics. Year-to-year comparisons showed costs starting to rise on the wholesale level, with the overall index increasing 2.7%, still below a six-year high of 3.1% in November. The core wholesale inflation rate was 2.5%, a sign that global economic growth might be raising commodity prices.

The moving four-week average for initial unemployment claims rose for the first time in five weeks, a week following its lowest level since March 1973. The Labor Department indicator is 36% below the 50-year average, which suggests employers continue to be reluctant to let workers go. That should boost hiring and wages, which should fuel consumer confidence to spend more.

The Commerce Department reported 10-year highs in both housing starts and building permits in January. Starts rose 9.7% to an annual pace of 1.33 million units, which was up 7.3% from the year-earlier rate. Single-family houses, which make up two-thirds of new houses, outpaced multi-family units year-to-year but are at a lower proportion of total construction, falling from 93% of housing starts 10 years ago. Building permits suggested further construction, jumping to their highest annual rate since August of 2007. Single-family starts have been rising to address concerns that there has been a shortage of houses for sale.

The University of Michigan’s February consumer sentiment index showed Americans little worried about the return of volatility to stock markets and more excited about income prospects, job security and expectations for new tax laws. The index reached its second-highest point since 2004, a sign that consumer spending will continue rising. An economist affiliated with the report forecast that expenditures should rise 2.9% in 2018.