In a sign that businesses may be letting supplies get ahead of demand, the Commerce Department reported that wholesale inventories grew in December at the same time that sales declined. As a result, the ratio of inventories to sales rose to its highest point since just after the recession. If demand doesn’t pick up, the ratio suggests production cuts could be ahead.

Employers listed more open jobs in December than they have since January 2001, the Bureau of Labor Statistics said. State and local government openings led the 3.7% increase from November. The number of workers hired reached the highest level since before the recession. Also, the number of Americans quitting their jobs – a measure of confidence in the labor market – was the most since before the 2008 financial collapse. 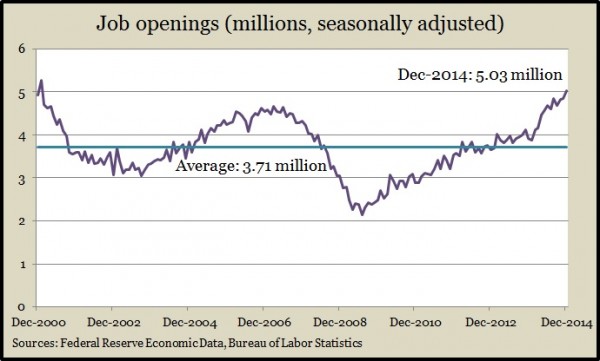 Retail sales dipped again in January as lower gasoline prices continued to reduce the amount consumers are spending, according to the Commerce Department. Signs of consumers spending their gas savings elsewhere remained elusive, as just seven of 13 retail categories gained from December. Year-to-year retail sales grew by 3.8%, below the historical average. Sales at gas stations dropped 14.5% in the last 12 months.

In a separate report, Commerce said business inventories rose in December for the third month in a row as sales declined for the fifth consecutive month. As with the wholesale inventories report, the data suggested businesses may be overestimating demand. Year-to-year, they let inventories grow 3.9% while sales increased 0.9%.

The moving four-week average for initial unemployment claims fell for the third week in a row to the lowest point since November, staying at historically low levels. The Labor Department reported that the average remained below the year-ago level as well as the 48-year average, suggesting that employers are reluctant to let workers go.

A preliminary February gauging of consumer sentiment showed Americans losing a bit of the optimism they expressed in January. The University of Michigan and Thomson Reuters news agency reported that their sentiment index dropped to 93.6 from an 11-year high reading of 98.1 at the end of January. Still the mid-February mark tied December as the most bullish reading in eight years.