Recovery in the labor market remained weak December. The number of job openings rose 1.1% from November but was still 5.1% lower than before the pandemic, last February. Openings were 11.6% below the all-time peak in early 2019. The Bureau of Labor Statistics said employers had 6.6 million openings, compared to 10.7 million individuals who were unemployed in December. Those looking for work don’t necessarily match up with all the help-wanted listings. But the two figures illustrate the turnaround in labor’s supply and demand since last February after nearly two years of job openings outnumbering the unemployed population. 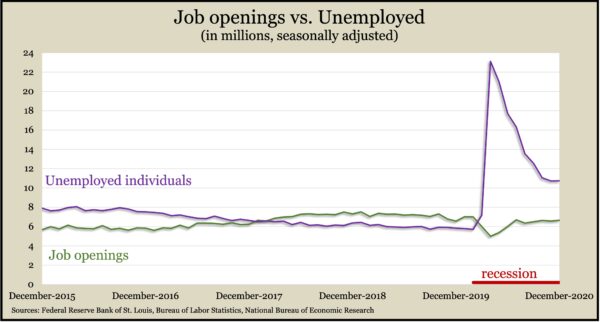 The broadest measure of inflation showed prices continued to recover in January from widespread pandemic lockdowns last spring. The Consumer Price Index rose 0.3% from December, mostly driven by a 7.4% increase in the price of gasoline. Excluding volatile costs for energy and food, the index was unchanged for the second month in a row, the Bureau of Labor Statistics reported. From the year before, prices rose 1.4% with food up 3.8% and energy down 3.6%, including an 8.6% drop in gas prices. The core CPI also rose 1.4% since January 2020, down from 1.6% in each of the previous three months and still below the Federal Reserve Board target of 2% inflation. Before the pandemic, last February, the core inflation rate was 2.4%.

The four-week moving average for initial unemployment claims declined for the first time in five weeks and the second time in 10 weeks, according to data from the Labor Department. The latest four-week average at 823,000 was down from nearly 5.8 million in April but still exceeded the highest average in 53 years of records before the pandemic. New claims are averaging nearly four times the level last February, when applications reached a 52-year low. More than 20 million Americans were claiming jobless benefits in the latest week, up 15% from the week before as more people received payments from pandemic-related relief programs.

The University of Michigan said consumer sentiment slipped from the end of January as expectations fell among households in the lowest third of incomes. Only 23% of households earning $75,000 or less reported improvements in their finances, the lowest since 2014. Among those in the top third of incomes, 54% said their finances have improved. An economist with the survey-based index said further stimulus payments should help lift sentiment, which leads to greater consumer spending, the main driver of the U.S. economy. He said the pandemic continues to weigh down expectations.