Employers raised U.S. job openings 4.8% to the second-highest level on record in December. The Bureau of Labor Statistics reported that the number of advertised openings reached 5.6 million, exceeding the level before the recession began, though shy from the 5.7 million peak in July. The number of workers quitting – suggesting confidence they’ll get better jobs – also rose. Both trends could help push up wages, which fuel consumer spending.

The Commerce Department said wholesalers decreased inventories in December, though sales sank even faster. The tell-tale inventories-to-sales ratio remained at the highest level since the recession, suggesting a mismatch between supply and demand that could hamper production and employment growth in coming months.

The moving four-week average for initial unemployment claims fell for the second time in three weeks, reaching the second-lowest level in 2016. Jobless applications filed with the Labor Department have remained below the 48-year average every week since early 2013, suggesting persistent reluctance by employers to part with their workers.

American consumers – whose spending drives about two-thirds of the U.S. economic growth – increased retail sales in January, for the third month in a row. The Commerce Department reported that nine of 13 categories experienced higher sales. In the last 12 months, only gas stations and electronics stores had sales declines. Lower prices have been holding back gas station sales. Year-to-year, total retail sales grew by 3.4%, the highest rate in more than a year. 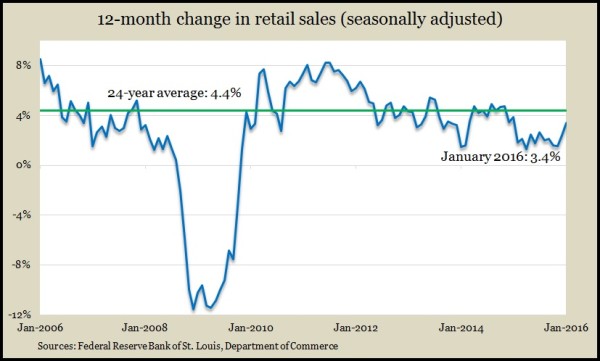 Similar to the wholesaler report on Tuesday, business inventories also continued to outpace sales in December, suggesting businesses are overestimating demand for their goods. Inventories rose 0.1% for the month and 1.7% since December 2014 while sales declined 0.6% since November and declined 2.7% year-to-year. To the degree businesses want to run lean, the inventories-to-sales ratio indicated the fattest conditions since the recession in 2009.

A preliminary reading of consumer sentiment from the University of Michigan suggests Americans remain fairly confident about their personal finances but mostly because their expectations for inflation are the lowest in 40 years of surveys. Overall, sentiment continued a gradual decline to the lowest point in four months. A university economist used the survey to project a moderate 2.7% rise in consumer spending in 2016.