The National Association of Realtors said a short supply of houses on the market held back pending home sales in December. But an imbalance between demand and supply also helped elevate year-to-year selling prices for the 20th month in a row, another indication that the housing industry is recovering from its recession lows.

For the seventh time in eight months, durable goods orders advanced in December, led by commercial aircraft and supported by broad gains in other industries. The Commerce Department reported that a proxy for business investment rose to cap off the biggest three-month increase in that measure since mid-2011.

U.S. home prices continued to rise in November, the 11th month in a row of improved year-to-year comparisons, according to the S&P/Case Shiller Home Price Index. The index of 20 cities showed a 12-month increase of 5.5%, the most since August 2006. Only New York City showed a price decline. A housing economist for Standard & Poor’s said the latest report along with other data “confirm that housing is contributing to economic growth.” 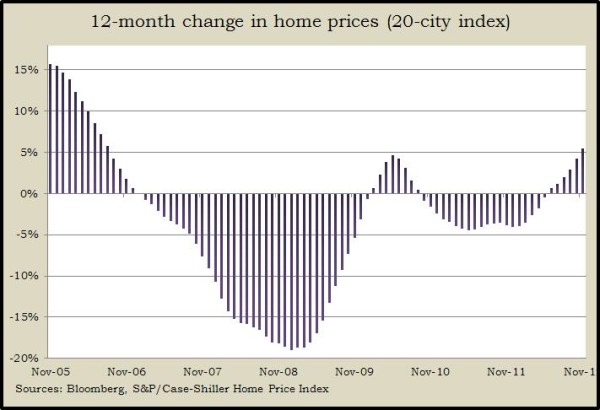 The building block of consumer spending – consumer confidence – took another hit in January. The Conference Board said its monthly index showed consumers’ assessment of current conditions as well as their outlook declined for the third month in a row and sank to the lowest level since November 2011. The business research group cited this year’s increase in payroll taxes – after a temporary cut expired – for souring consumers’ mood.

The U.S. economy contracted in the final quarter of 2012, largely because of military and other government spending cuts. The Bureau of Economic Analysis reported the Gross Domestic Product declined at an annual rate of 0.1% in the last three months of 2012. Although the first of three estimates is preliminary and based on the least amount of data, it surprised analysts who were expecting a modest gain of 1.1%. Aside from reductions in government outlays, business investments and consumer spending continued at a moderate pace, providing some comfort that the economy has some momentum toward expansion.

Anticipating tax changes in the new year, companies paid out dividends and bonuses and accelerated pay in December, boosting personal income the most in eight years, the Bureau of Economic Analysis reported. Personal spending, though, remained relatively constrained, rising less than analysts expected and raising the saving rate to a three-year high of 6.5% of disposable income. A key inflation measure registered a 1.4% annual rate, below the Federal Reserve target of 2%.

The moving four-week average for initial unemployment claims grew for the first time in three weeks, although it remained near a five-year low. The Labor Department report offered evidence of stagnated though moderately positive hiring conditions.

Indeed, employment conditions kept improving in January, but the pace remained modest and fell below the upwardly revised progress of recent months, according to a Bureau of Labor Statistics report. The unemployment rate inched up to 7.9%, in part because more jobseekers have entered the market. Data indicate a gradually improving labor market with average wages outpacing inflation, construction work picking up and lower rates of long-term unemployed.

The manufacturing expansion that stalled near the end of 2012 got going again in January. The Institute for Supply Management said new orders, production, employment and inventories all grew at a faster pace, signaling the strongest development in manufacturing since April.

Consumer sentiment picked up in the final January report from Thomson Reuters and the University of Michigan. The gain was higher than analysts expected and suggests hope for further consumer spending to fuel economic growth. In particular, consumers expressed greater confidence in their prospects six months from now.