Manufacturing has become an unexpected bright spot in the U.S. recently. The Institute for Supply Management said its manufacturing index rose in November for the sixth month in a row, to a level last seen in April 2011. Purchase managers said new orders, production, employment, exports and backlogs all grew at a faster pace last month. The employment component of the index was the highest since April 2012.

The Commerce Department provided more evidence of housing’s uneven revival with higher-than-expected construction expenditures in October. Spending on residential building rose a smidge from September and was up 5% from October 2012. A shift toward multi-family residences helped lift the spending.

The automotive sector remains a driver of the U.S. economy as Americans bought more motor vehicles in November than any time since February 2007, according to the trade group Autodata Corp. Dealers sold an annual rate of 16.4 million vehicles last month, led by imports and trucks. Consumer incentives and pent-up demand are sustaining auto sales.

The U.S. trade deficit shrank in October for the first time in four months. Although imports grew slightly from September – a measure of American consumer and business spending, the Commerce Department said exports gained more. That might reflect firming global demand for U.S. goods abroad, particularly in Europe and China. Less reliance on imported oil also figured in.

Separately, Commerce reported a 25% increase in home sales in October, following a dip from higher mortgage rates in September. On an annual basis, the sales rate reached its highest point since June. The median sales price fell marginally from October 2012.

Non-manufacturing accounts for the majority of the U.S. economy, so analysts took note that the ISM Non-Manufacturing Index  dipped in November, though it indicated expansion for the sector for the 47th month in a row. All 11 industries surveyed for the report signaled expansion and overall “a steady course of incremental growth and a positive outlook for the upcoming months.”

The Bureau of Economic Analysis reported stronger-than-expected economic growth in the third quarter. The gross domestic product expanded at an annual rate of 3.6%, the highest since the first three months of 2012. That’s up from an earlier estimate of 2.8% growth for the latest quarter, mostly because businesses built up inventories more than previously indicated. Analysts said that could eventually hamper progress if consumer demand doesn’t rise along with inventories.

Another sign of resilience in the manufacturing sector was that new factory orders rose slightly in October, excluding the volatile transportation equipment category. Including transportation, the Commerce Department said, orders dipped for the third time in four months.

The moving four-week average for initial unemployment claims fell for the fifth week in a row. The Labor Department said claims remained below the all-time average level, as they have all year. That indicates a reluctance among employers to let go of their workers.

Employers added more jobs than expected in November, partly rebounding from the 16-day federal government shutdown in October but also suggesting that the labor market is continuing its comeback. The 203,000 net jobs beat the 12-month average and included more jobs in higher-paying areas such as transportation, warehousing and manufacturing. The unemployment rate dropped to 7% for the first time in five years, according to the Bureau of Labor Statistics report. Among the encouraging indicators were lower numbers of Americans who were settling for part-time work and fewer who were too discouraged to go on looking for a job. 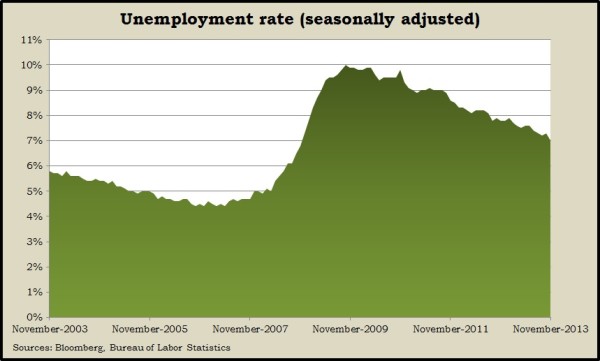 Personal income declined in October while spending rose a little more than anticipated. As a result, the personal saving rate went down to 4.8% of disposable income, the Bureau of Economic Analysis reported. Figures also showed that the Federal Reserve’s favorite gauge of inflation stayed below the 2% target in October, suggesting the economy still isn’t growing fast enough for the Fed.