Manufacturing expanded more than expected in November, according to the Institute for Supply Management. The trade group’s manufacturing index was off slightly from October, which tied with August for a three-year high. Purchase managers said new orders and backlogs rose in November, suggesting continued momentum for a vital part of the U.S. economy. 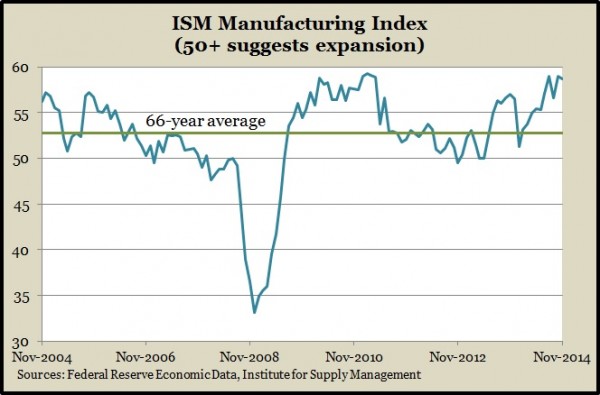 The automotive sector maintained its position as a driver of the U.S. economy in November, selling an annual rate of 17.2 million motor vehicles, more than analysts expected and the most since August. According to the trade group Autodata Corp., truck sales rose at a faster pace than cars in November. Domestic sales rose 5% for the month and 10% for the year while imports rose 2% for the month and declined from the year before.

The Bureau of Labor Statistics revised its earlier estimate of worker productivity in the third quarter showing that it advanced at a bit faster rate but still slower than analysts anticipated. Output rose 4.9% on an annual basis, while hours worked increased at a 2.5% pace. Labor costs actually fell over the quarter, another sign that inflation is not an imminent concern.

Non-manufacturing accounts for the majority of the U.S. economy, and it grew by the highest level since a nine-year high in August, according to the ISM Non-Manufacturing Index. New orders and backlogs both gained for the month, suggesting sustained business ahead. The employment component of the index slowed after near-record pace in October.

Policy makers with the Federal Reserve Board released a Beige Book report suggesting anecdotal evidence of a continued moderately growing economy. Lower gas prices and broad-based employment gains are fueling more confidence that consumers will keep buying cars and other merchandise. The report even cited some regions where employers are concerned about hanging on to their workers.

The moving four-week average for initial unemployment claims rose for the fourth week in a row and reached the highest level since September. The Labor Department said claims continued to remain below the all-time average level for the 23rd consecutive month. That suggests persistent reluctance among employers to let go of their workers.

Employers added more jobs in November than in any month in the last three years, 43% more than the 12-month average, beating analysts’ projections. And the Bureau of Labor Statistics said that’s on top of 44,000 more jobs than previously estimated in September and October. Hiring was widely distributed with manufacturing and construction growing at a faster pace. The unemployment rate stayed at 5.8%, the lowest since the financial crisis in 2008. The average workweek and average pay both increased.

Even as the global economy continues to stumble, exports grew in October, helping to shrink the U.S. trade deficit. The Bureau of Economic Analysis said the trade gap in oil widened as exports declined more than imports, which reached the narrowest deficit in three years. Still, exports overall grew 1.2% from September while imports added 0.9% to a new record.