Realtors reported a 0.2% increase in pending home sales in October, the first gain in three months, but it still was below analyst expectations. The trade association complained of not enough houses for sale to meet demand, which has been pushing up house prices and causing affordability issues in some regions. The pending home sales index rose 3.9% from October 2014, the 14th consecutive year-to-year gain.

Manufacturing contracted in November for the first time in three years and reached its lowest level since the recession, according to the Institute for Supply Management. The trade group’s manufacturing index showed the toll that weak global growth is putting on U.S. companies with exports contracting six months in a row. Of 18 industries, 10 shrank. However, overall hiring continued.

The Commerce Department provided more evidence of housing’s revival with higher-than-expected construction expenditures in October. Spending on residential building – accounting for more than one third of the total – rose 3% from September and gained 16.8% from the year-ago pace. Manufacturing construction increased for the third month in a row.

The automotive sector maintained its position as a driver of the U.S. economy in November, selling an annual rate of 18.2 million motor vehicles, remaining around 12-year highs. The pace dropped off slightly from October but was better than analysts expected. According to the trade group Autodata Corp., truck sales rose at a faster pace than cars and imports sold more briskly than U.S.-made vehicles.

The Bureau of Labor Statistics revised its earlier estimate of worker productivity in the third quarter to 2.2%, a bit faster than initially reported. Output rose 1.8% on an annual basis, while hours worked fell 0.3%, the first decline in six years. Labor costs increased 1.8% over the quarter, another sign that inflation is not an imminent concern.

Led by demand for commercial aircraft, factory orders rose in October for the first time in three months. Even excluding the volatile transportation equipment category, orders increased for the first time since July. The Commerce Department report showed troubles in the energy-producing sector holding back manufacturing. An indicator of business spending rose for the second month in a row.

Non-manufacturing accounts for the majority of the U.S. economy, and although it grew at a slower pace in November, it registered expansion for the 70th month in a row. According to the ISM Non-Manufacturing Index, export orders was the only component to shrink from October. This index reflects domestic trends and the relative strength of the U.S. economy more than the manufacturing index, which is sensitive to weakened global demand.

The moving four-week average for initial unemployment claims dropped for the first time in five weeks, when it hit its lowest mark since December 1973. Labor Department data show claims continued to remain below the all-time average level for the 35th consecutive month. That suggests persistent reluctance among employers to let go of their workers.

Even as the global economy continues to stumble, U.S. business and consumers spent less on imports in October, helping to expand the U.S. trade deficit more than analysts expected. The Bureau of Economic Analysis said the trade gap widened by 3.3% to $43.9 billion as exports declined 1.4% and imports fell by 0.6%. In September, the trade gap was $42.5 billion, which was larger than initially estimated.

Employers added more jobs than expected in November, prompting more analysts to consider a short-term interest rate hike by the Fed Reserve Board this month a virtual shoo-in. The 211,000 jobs added in November were on top of 35,000 gains not counted in October and September, the Bureau of Labor Statistics said. The average hourly wage rose 2.3% from November 2014. Analysts said the relatively strong report should assure the Fed that the U.S. economy is growing strongly enough that it can sustain itself without as much government stimulus.The unemployment rate stayed at 5% – considered by some economists as full employment. The rate has dropped to its level before the recession started at the end of 2007. The U-6 measure of underemployment, though down to 9.9%, remains above its pre-recession rate of 8.8%. 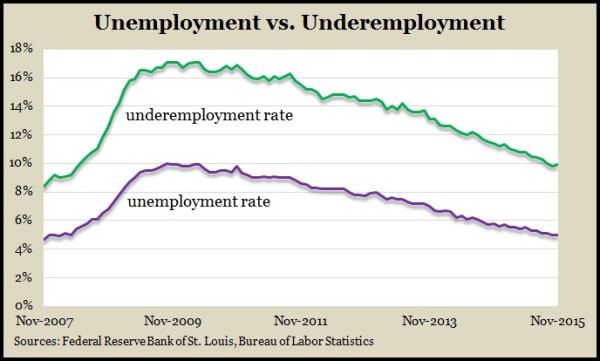